The first Scandinavian castle I visited was Kronborg in Denmark. My husband and I took the train from Copenhagen to Elsinore on a cold, bone-soaked, rainy day, questioning our decision for the length of the hour-long journey. We could have luxuriated in our beautiful room at the historic Hotel d’Angleterre and had tea sent up to the room, but we knew we were unlikely to return to Denmark any time soon. The castle and its story linking to Shakespeare’s Prince Hamlet was too much to resist, and our decision to go became a highlight of our stay.

The massive edifice of Kronborg — often called Hamlet’s Castle — sits at water’s edge, which once made it the ideal location for kings to collect “sound dues;” monies paid by any ship wishing to sail through the sound past the castle. The accrued wealth was used in part by Frederick II to lavishly decorate the castle — think copper roofs and spires reaching heavenward, and paintings, carvings, gilded surfaces, marble and opulent furnishings inside. Impressive feasts were served to guests and no extravagance was too much.

Happily, there’s no shortage of castles and palaces in the Scandinavian kingdoms of Denmark, Norway and Sweden. Also in Denmark, Frederiksborg Castle bears the distinction of being Scandinavia’s largest Renaissance castle. Largely destroyed by fire in 1859, it’s since been rebuilt and restored, with an exceptional example of baroque garden architecture laid out in 1725 by architect J. C. Krieger. Royal monograms can be seen in the boxwood, and parterre flowerbeds add an ornamental element. An English garden is located adjacent to the baroque garden. Inside, Denmark’s Museum of National History is housed, showcasing exhibitions that tell 500 years of the country’s story. 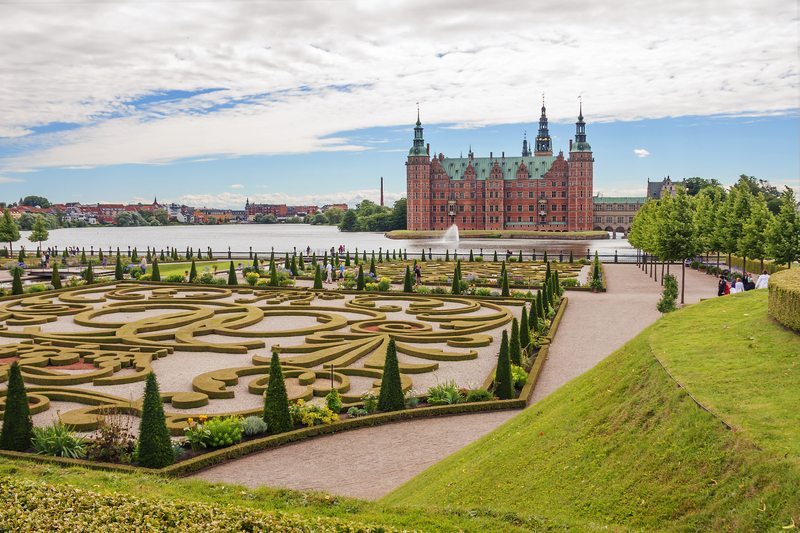 Construction of Norway’s Akershus Castle began in 1299 by King Håkon V; today, the medieval castle fortress is where Norway’s Prime Minister keeps offices. Located in Oslo, the castle also functioned as a prison for a variety of inmates who ranged from authors to political activists. Interestingly, prisoners were often rented out to perform day labor in the city. During summer, guided tours are offered, and the castle and grounds play host to festivals and concerts.

Home to Sweden’s National Portrait Gallery, Gripsholm Castle faces the waters of Lake Mälaren in southern Sweden. Built in 1537 by Gustav Vasa, the castle has been home to numerous royalty, and an unusual resident who still abides in a glass case in the Upper Armoury. Leo is an 18th-century lion, apparently preserved by someone who had never seen an actual living, breathing lion, or who was new to the world of taxidermy. The unfortunate creature has oddly shaped, very un-lion-like eyes, and a row of teeth that look more human than feline. See the lion, but don’t miss what is perhaps the castle’s most impressive interior space: King Gustav III’s theater, with a functioning performance stage, a full auditorium and a breathtaking Neoclassical design replete with coffered ceiling and plaster sculptures by artist Johan Tobias Sergel.

Use Travel to Teach By Budgeting for Vacations as a Family

When you have little ones, every experience can be a teaching moment and travel is no exception. Through travel we learn compassion, tolerance, history, an appreciation for different cultures and cuisines, and the value of having an open mind. But one thing often overlooked is that travel can teach budgeting.