Abu Dhabi at the height of summer. The temperature nudges 120 degrees Fahrenheit. It’s too hot to go anywhere or do anything — you would think. But starting next year there will be a fresh option for long-suffering parents to relieve their kids of sweltering boredom. Dress them up in winter coats, gloves and hats and let them play in the snow.

The 120,000-square-foot Snow Abu Dhabi will be the centerpiece of the new $1.2 billion Reem Mall close to downtown. This desert nation’s ambitions have never been modest. While this won’t be the first indoor snow park in a hot country (the neighboring emirate of Dubai opened an indoor ski resort in 2005), it will be the world’s largest, offering themed zones and 13 snow-based activities.

Abu Dhabi illustrates what can happen when money is no object. The richest city on Earth claims more than a quarter of a million households boasting an annual income of more than $250,000. This mind-boggling wealth is based on oil, the emirate’s great natural blessing. With a relatively tiny population, the oil money touched virtually every Emirati family and transformed a once modest fishing port into a glitzy, high-rise metropolis.

The vast majority of the population comprises expatriates from South Asia, Europe and North America. For them especially, the climate has always posed a challenge. In July and August the temperatures are ferocious, but wealth has allowed the emirate to subvert the extremes of its climate, conjuring snow in summer and water in the desert. 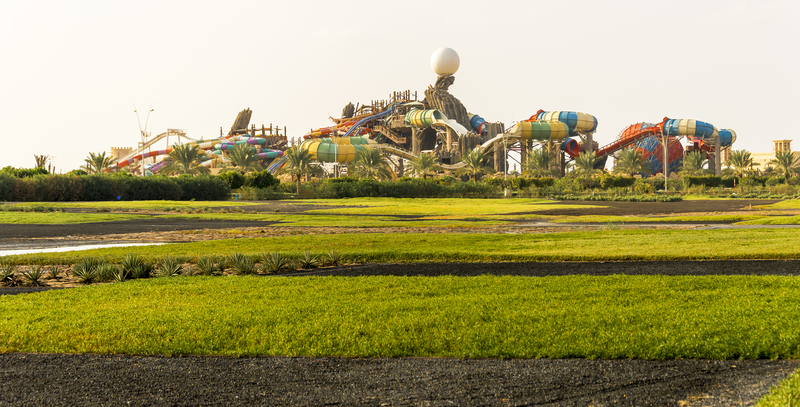 Yas Waterworld is widely regarded as one of the world’s top water parks, as you’d expect of an attraction that initially cost $250 million to build. Here kids and adults alike find another escape option from heat and boredom. With 43 separate rides, more than 5.6 million liters of water course through the pools and slides every hour. The park includes the largest surfable sheet wave in the world and features as a regular venue for the World Flowboarding Championships.

Next to the waterpark awaits another great escapist theme park, the huge, indoor Warner Bros. World. Attractions include tributes to Batman and Superman, along with cartoons such as Scooby-Doo, Bugs Bunny, the Jetsons and the Flintstones. A wide variety of dining options and, of course, souvenir shops complement the dedicated rides.

The third of the three theme parks on Yas Island (look into available discount tickets for all three) is Ferrari World, devoted to the iconic Italian motor company. Attractions include Formula Rossa, the world’s fastest roller coaster, accelerating 0–149 mph in 4.9 seconds. Less extreme activities include an indoor go-kart track and a variety of racing simulators. Retail and dining options are located within an indoor replica of an Italian village.

Ferrari World is located beside the famous motor-racing track, Yas Marina Circuit. Visitors over the age of 21 can drive the track in a Ferrari, either as passengers to a racing driver or behind the wheel themselves. The Yas Marina Circuit, best known for hosting the closing race of the Formula 1 Grand Prix season each November, throughout the year proves a mecca for gearheads of all ages, with regular events including drag races and drifting competitions. 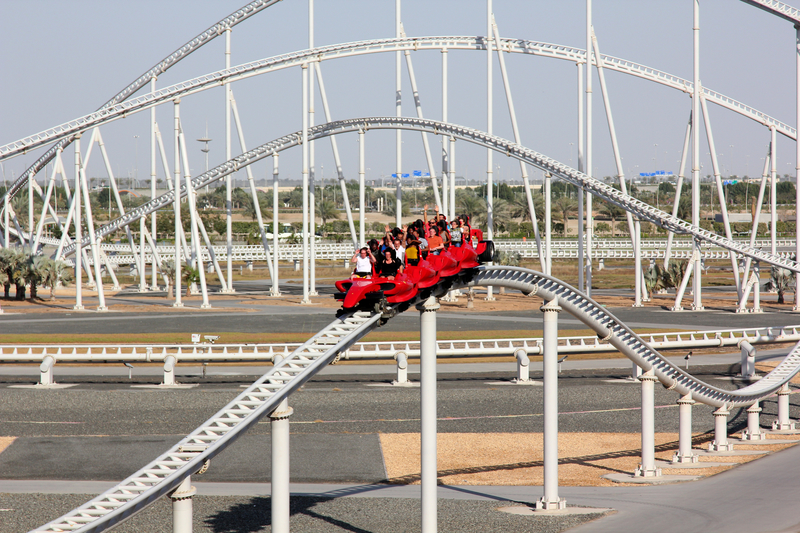 Theme parks and motorsports represent just two facets of Abu Dhabi’s push to establish itself as a world-class destination. At the other end of the scale balance its prestigious museums. In 2017 Louvre Abu Dhabi opened, the first outpost of the famous Parisian museum outside France.

Located on Saadiyat Island — the city’s new Cultural District — and housed in a breathtaking building designed by Jean Nouvel, the Louvre aims to bridge the gap between Eastern and Western art. The exhibits include many famous paintings loaned by the parent museum.

Ultimately, the star attraction will be “Salvator Mundi” by Leonardo da Vinci, the world’s most expensive painting, purchased in 2017 for $450 million and due to go on display in late 2019.

Another outpost of a famous museum should begin construction nearby in the next few months. The Guggenheim Abu Dhabi will display contemporary art in a building designed by Frank Gehry. Close by, the proposed Zayed National Museum has yet to break ground but promises to be the most spectacular of all, housed in a building reminiscent of Sydney Opera House but on a much larger scale.

The Al Qana Aquarium, slated to open in early 2020, will display 33,000 marine creatures in 10 aquatic zones and will be the largest aquarium in the Middle East.

Abu Dhabi is all about superlatives: the biggest, the most expensive, the best. It may not always be to your taste, but as the city continues to evolve, it seeks to ensure there will be something here for everyone. One thing you can count on: You’ll never be bored in this dynamic Arabian city.