Diving Back Into the Drive-In

A half century ago, the outdoor drive-in movie theater was more than an entertainment venue. It was a national institution, giving Americans of all ages an opportunity to enjoy several pastimes at once: taking in a “popcorn” movie, eating outdoors and hanging out with friends and family.

While the majority of drive-ins closed by the 1970s and 1980s, a handful steadfastly stayed in business. Others were resurrected and retooled for the era of Dolby Sound and CGI. Regional park districts and other venues, meanwhile, found interesting ways to revive the outdoor movie tradition, complete with classic vintage movies or recent family-friendly features. Whether you are on the road or stay-cationing this summer, there’s a multiplex of outdoor cinematic destinations across the United States allowing everybody to experience a night at the movies al fresco.

The Finger Lakes Drive-In is New York state’s oldest-operating and longest-running drive-in, keeping audiences entertained since 1947. During the season, it screens movies seven nights a week. While it is outfitted with speakers for those watching the movie from their cars, it conjures a sense of nostalgia as the film can still be heard through an FM radio transmission for anyone who tunes to 101.9 FM. Even with an updated sound system, a display of classic cars drivers see as they enter the property and car-side snack bar delivery add to its nostalgic charm.

In the heart of the Lehigh Valley, near Allentown and Bethlehem, Becky’s Drive-In keeps the best aspects of mid-20th-century America going. Although the double features are mainly first-run movies, every show comes fully loaded with such nostalgic features as a playground, fire truck and pony rides, to special events like fireworks shows, a car show and Boy Scout demos. The season closes out every year in the fall with a dusk-to-dawn marathon of classic horror movies from the 50s, with a bacon-and-eggs breakfast for those who make it through.

Circle Drive-In, another one of the longest-running drive-ins in America (built in 1945), still shows first-run movies every Friday, Saturday and Sunday, as well as hosts special events and film festivals each season. Every October, Circle transforms into the Circle of Screams, America’s only haunted drive-in theater, featuring Halloween-themed movies, a hayride, a haunted house and an eerie circus sideshow. The Haunted Hayride brings movie scenes to life and the Cirque De Peur Clown show gives you a real-life performance.

Hull’s Drive-In, the nation’s only non-profit, community-owned drive-in theater, has been bringing movies to the public for more than 65 years. “Hull’s Angels,” a volunteer staff, keeps the fun and films rolling, and while FM radio transmission is available on 88.1 FM, Hull’s still offers the old-school speakers on poles. The theater runs double features on its single screen every Friday, Saturday and Sunday night from mid-March through October. Dogs can come along for the ride as Hull’s is one of the few drive-in theaters that still permits pets.

Family Drive-In Theatre, opened in 1956, shows movies through early December on Friday, Saturday and Sunday nights in the spring and fall and seven nights a week in June, July and August. It has the distinction of operating two screens and being the only remaining drive-in theater in the Washington, D.C. metropolitan area. It balances the nostalgia of original speaker poles and music from the 1950s, 60s and 70s with digital projection, the latest concessions and a pet-friendly policy.

The cash-only Swan Drive-In, established in 1955 and located 90 minutes north of Atlanta, features a full concession stand proffering such indulgences as funnel cakes and fried Oreos. It is open every night in summer and shows current films. 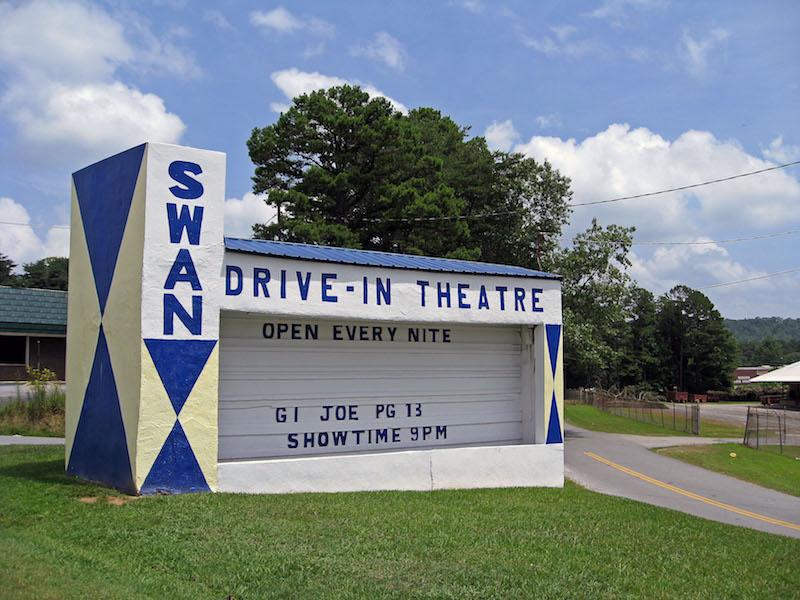 The Sunset Drive-In, one of the granddaddies of outdoor cinema, opened in 1920 and is still independently owned and operated. The bright neon sign is hard to miss when lit up from the 101, and plays movies multiple nights of the week. Given its California location, the weather is perfect nearly year-round for visitors and locals alike to attend the $6 screenings.

Coming Soon to a Park Near You

Walkway Over the Hudson, the longest elevated pedestrian bridge in the world, hosts Movies Under the Walkway, where family-friendly movies shown on a big screen are viewed with the bridge as a backdrop. Prior to each showing, families can enjoy food trucks, live music and other activities.

Sunset Cinema Series in Laguna Niguel and Salt Creek Beach Parks brings the big screen to several regional parks across Orange County, presenting about 14 different movies every summer. People of all ages can enjoy recent favorites and popular classics under the stars with food trucks, a beer and wine garden, various food vendors, photo opportunities and pre-show entertainment. Each film screening is free of charge to attend and is a great opportunity to enjoy the beautiful regional parks throughout Orange County.

Elsewhere, The Show Must Go On

While Red Rocks Amphitheater is known worldwide as one of America’s great concert venues, the locals have an open secret: It plays movies during the summer. Its annual Film on the Rocks series is a fantastic place to take in a movie under the stars with friends and family. And if you miss movie season, no worries! There are several great family-friendly concerts and events here throughout most of the years.

Pamper Mom for Mother’s Day at The Rose Hotel

The Rose Hotel Chicago O’Hare, a Tapestry Collection by Hilton, and its first-floor bar and restaurant Thorn Restaurant & Lounge, are celebrating moms this year with an exclusive Mother’s Day High Tea May 9. Available at 11 a.m. and 2 p.m., the tea is $60 a person or $30 for children 12 and under. The price includes complimentary parking, live music from Dina Bach and a curated menu.

The Broadmoor Manitou and Pikes Peak Cog Railway will be back and better than ever in May 2021. The iconic Pikes Peak Cog Railway, one of only two cog railways in the United States, and its view from the summit is where “America the Beautiful” was penned. Experience this with your family when it reopens.

Many women in the United States don’t think twice about going to the store to purchase feminine products. With many options in brands, sizes, colors and even fragrance, we forget others around the world do not have such a luxury. Cora changes the way women receive products, providing a healthier, more sustainable way that is good for the environment and body.