Escape to Mexico’s Mazatlán for the Malecon, Cycling, Landmarks and More

Searching for a fresh Mexican address to explore? Consider Mazatlán, a sunny Mexican town set upon miles of sparkling Pacific oceanfront, featuring Latin America’s longest boardwalk. Known as the Malecon, this lighted, 13-mile-long walkway and adjacent waterfront takes in the city’s Golden Zone and continues to the far end of Cerritos Beach.

Cycling paths add to the boardwalk area, part of Mazatlán’s recent tourism renaissance, with renewed attention falling on its sites, lodging, dining and annual events. This year, Día de los Muertos — the popular Day of the Dead celebration — will take place Nov. 1 and 2. Centered in the Plaza Machado, the lively event will fill the streets of the Centro Histórico district, where a fascinating blend of French, Italian and German architectural influences can be seen, with some elements traceable to the district’s establishment in 1571.

Plaza Machado is flanked on one side by the towering Immaculate Conception Basilica. Noteworthy for its gold ornamentation and beautiful stained glass, this Catholic church also features a Star of David in the uppermost window — a tribute to a Jewish family who contributed funds to the church’s original construction in the 1880s. 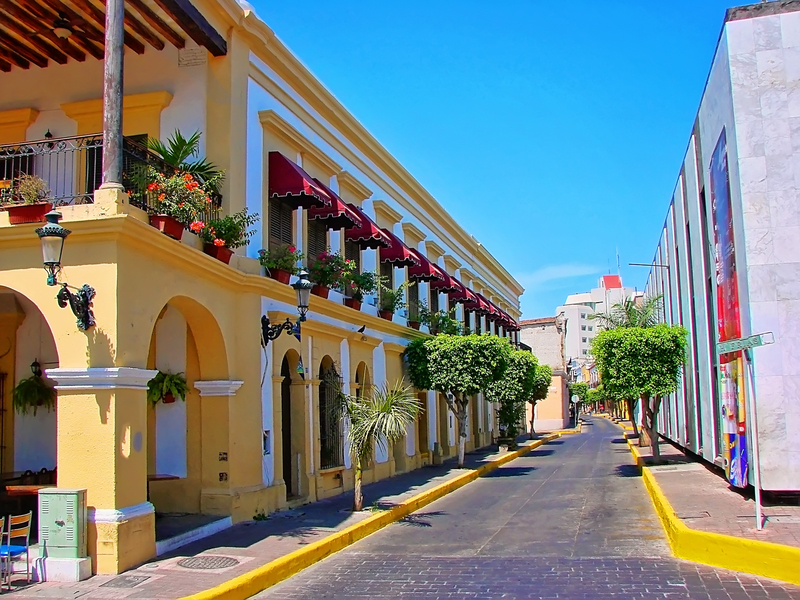 Other towering sites to visit include El Faro, one of the highest working natural lighthouses in Latin America. Steep hiking paths lead to its spot 515 above the port. Once there, enjoy spectacular views from the new glass sky bridge. At port level, and located next to the Parque de la Ciudad and Parque Infantil, the Aquario Mazatlan is a great family diversion, with a variety of shows starring birds and seals. Visitors can also take in the spectacle of local cliff divers leaping into the sea from high, craggy outcrops at Parque Glorieta Rodolfo Sanchez Taboada.

Newly renovated, the fabulously ornate Ángela Peralta Theater and Cultural Center is the setting for theater and musical productions featuring world-renowned performers. It’s also the only theater to survive a collection of mid-1800s structures, including Teatro El Recreo, Teatro Principal and the Teatro Alegria. The Ángela Peralta Theater narrowly escaped destruction. It was once scheduled for demolition, having fallen into serious ruin for a host of reasons, including flood damage during 1975’s Hurricane Olivia. Today, visitors can see the space fully restored to its former glory.

For nightlife, popular clubs and restaurants can be found in the district of Zona Dorada. When it’s time to say goodnight, head to The Inn at Centro Histórico close to the theater, where rooms overlook the historic Old Town. A modern, swish resort vibe can be enjoyed at El Cid Marina Beach’s waterfront suites, or at El Cid El Moro Beach Hotel in the Golden Zone district.