Explore a New York Treasure With Your Kids

Perched above the Hudson River on the northwestern edge of Manhattan, The Met Cloisters appears to have been transported from a medieval European village and inserted into the riverside gardens and woodland of Fort Tyron Park. And, in fact, many parts of it were: The gorgeous structure with its sweeping views of the river contains elements from French abbeys that include four late French Gothic Flamboyant windows moved from their original home at a Dominican monastery in Sens, nine arcades from an ancient Benedictine priory at Froville, and a selection of features relocated from a 13th-century church at Saint-Geraud at Monsempron in France.

It was art dealer and sculptor George Grey Barnard who purchased the buildings and orchestrated their dismantlement and reconstruction in New York. The main building was designed by Charles Collens, and four separate arched cloisters emanate from it: Cuxa, with a quadrangle-shaped garden and stone columns carved with fantastical figures and geometric patterns; Saint-Guilhem, with a central fountain and glass skylight; Bonnefont, with 21 double capitals and ornately carved marble elements; and Trie, with a central limestone cascade fountain and 18 capitals carved with scenes from medieval tales, including Saint George and the Dragon.

American philanthropist John D. Rockefeller, Jr. was behind the acquisition of the complex for the Metropolitan Museum of Art. Today, the magic spaces are a branch of the Met, and house an estimated 5,000 pieces of mostly European art and artifacts. The majority hails from the Byzantine through the early Renaissance periods. No matter how many happy visits I make to this tranquil city corner, I’ve never explored every piece of artwork or every corner of the parkland. 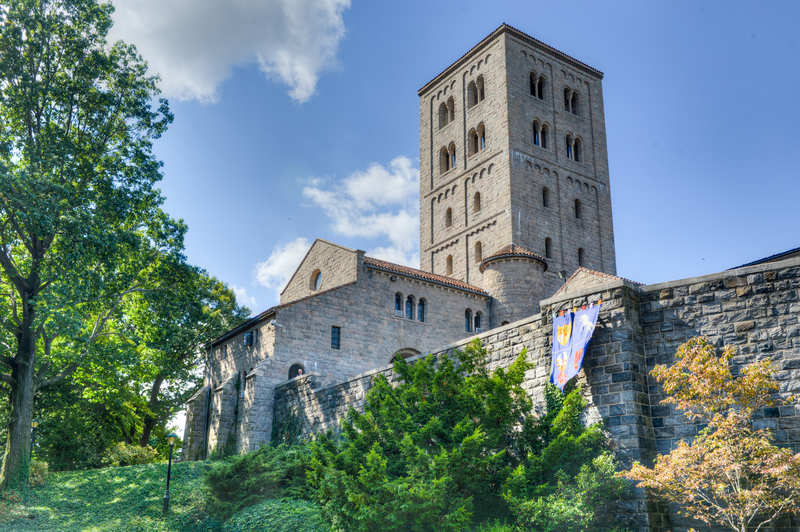 The Cloisters, a part of the Metropolitan Museum of Art. Photo: Demerzel21 | Dreamstime.com

When I last came here to spend the day, it was in the company of my adult son James, who’d taken the day off from work in Midtown Manhattan to accompany me. We paid homage to favorite spaces, including the Glass Gallery, the Nine Heroes Tapestry Room, and the Unicorn Tapestry Rooms (though I still find the woven scenes of hunting gentle and innocent unicorns to be deeply disturbing, even if they are imaginary creatures). We also spent a great deal of time perusing the collection of illuminated books originally gathered by financier J.P. Morgan for his private collection.

Other features include around 300 stained-glass panels dating from the 13th to 16th centuries, and an impressive store of precious objects created from ivory, silk, silver and gold that can be viewed in the Treasury.

When you go, plan for the better part of a day. There’s a café on site, and the surrounding parkland is absolutely worth exploring. Skip the city traffic and make use of the public transport system. The closest metro stops are Dyckman Street Subway and the 190 Street Subway.

Family travelers, head to Bloomington, Indiana, this summer for under-the-radar activities and events.