Families traveling in Europe are often surprised at the size of the average hotel room; except in modern upscale hotels, rooms with two double- or queen-sized beds are not standard, nor are cribs or rollaway beds for children. One of the most popular cities for tourists, Florence is no exception. But you can find hotels with family-sized rooms in all price ranges and near the major tourist attractions.

The closer you are to the historic center, where most of the sights are, the less time you will have to spend getting to them, so neighborhoods around Santa Croce, San Lorenzo and Santa Maria Novella are convenient. Unlike many popular cities, Florence has a surprising number of hotels in all price ranges in the historic center and nearby neighborhoods.

But don’t overlook more distant hotels that offer free shuttles. The center of Florence can be crowded, especially in high season, and your family might enjoy the relative quiet of more distant neighborhoods or hotels along the river. You’ll also find neighborhood restaurants less crowded — and often better — than the ones close to the Duomo and Uffizi. Many of these hotels have restaurants and, after a day of trying to keep the family together in Florence’s crowds, retreating to a quiet spot for dinner may sound appealing. If you’re there for a few nights, you may even find your family greeted as “regulars” in a neighborhood restaurant.

Across the Ponte Vecchio, near the Pitti Palace, the Oltrarno neighborhood is one to consider. Several mid-priced hotels on this side of the river are close to palace museums and Boboli Gardens, and you’ll enjoy shopping and browsing in the many studios and workshops on the atmospheric side streets.

Many of the older hotels in Florence began life as the homes of wealthy Renaissance families, so don’t be surprised at the palatial ceilings and often grand decorations — frescoes, gilded stucco, carved woodwork — in even modest hotels. That grandeur may have its cost, however: These older buildings often lack elevators, so pack light and be prepared to climb stairs, especially at budget hotels. 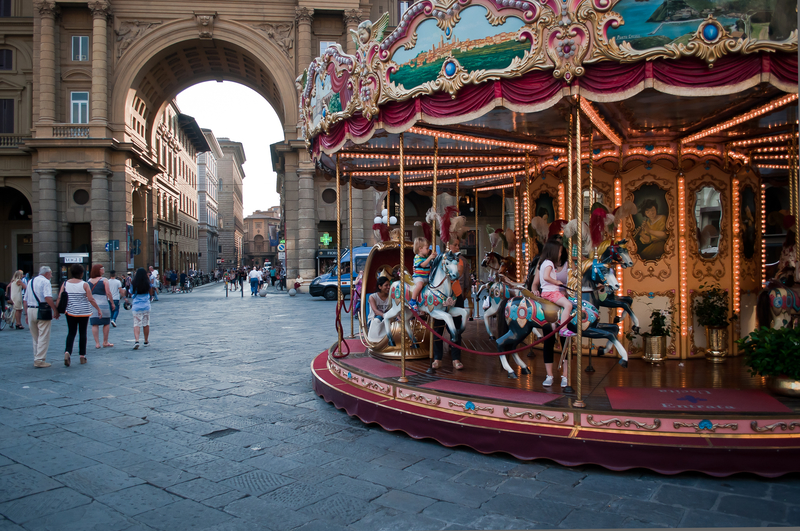 These hotels all have family rooms or suites and welcome children:

A 15th-century palazzo with luxurious suites, gardens and a swimming pool, about a 10-minute walk from the Duomo with a shuttle service to the historic center

Moderately priced small hotel only five minutes from the Duomo and San Lorenzo; there are laundry facilities and breakfast is included.

Moderately priced with luxury touches, opposite Santa Maria Novella station and close to the main sights; kids love the rooftop terrace and pool.

A budget option only five minutes from the Duomo, with rooms large enough for families

Another budget option near San Lorenzo and about 10 minutes’ walk from the Duomo; breakfast is included in the rate.

A peaceful alternative to the crowded center, in a converted water mill overlooking the river; there’s a swimming pool, restaurant and shuttle bus to take your family to the historic sights.