There’s something particularly romantic about Hotel Le Cep, a charming, one-of-a-kind, boutique hotel comprised of adjoining historic 14th–16th-century buildings. The 5-star luxury hotel is within walking distance to each significant historical site in Beaune, the medieval town and capital of the Burgundy wine region.

This member of the Small Luxury Hotels of the World and Chateaux & Hotels Collection boasts 64 rooms, including 32 suites, each personalized with names corresponding to famous Burgundy wines and individually decorated, whether under the high-beamed roof, in a duplex with a spiral stairway or with a red velvet headboard. Hotelier Jean-Claude Bernard, who attends design shows in Paris and elsewhere, personally chooses the antiques and furnishings. Bernard is a gracious host who greets guests with all the warmth of someone who wants clients to enjoy their stay and return, as we did.

My husband and I stayed at Le Cep for the first time during an overnight drive from Paris to Nice on Election Day 2004. We reserved the room that morning from Paris because I wanted to be sure to stay in a hotel with access to CNN so I would be able to see the results. (At the time, CNN was the only American station available internationally and only within the best hotels.)

Upon arrival, the ambiance immediately charmed with its refined appeal; the interior is a warm, magical space which sprawls from the reception area to a fireplace lounge and piano lounge; one sitting room boasts vitrines showcasing photographs, including prominent American visitors. Beyond the reception desk, there’s an intimate bar staffed by a welcoming barman who offers selections of regional Grand Crus. Nearby doors open out to a glorious 16th-century courtyard, where an abundant breakfast buffet is served, which connects to lodgings in a series of adjoining buildings. The tower of one ancient building houses a fitness center with a terrific panoramic view.

Since that first, last-minute reservation, I’ve stayed in some fabulous rooms in the main building. When I last visited for the fourth time in September 2018, I was lucky enough to be in a gorgeous, newly appointed suite, just beyond the courtyard, up a couple of steps and across from the spa. The antiques-adorned bedroom was beautiful and the oversized marble bathroom with a standalone tub and separate, round, glass-enclosed shower both situated in the middle of the room. It was all quite extravagant and romantic.

Spa Marie de Bourgogne made its debut in 2015, but last year was my first experience in the spacious, 3,700-square-foot space. There are a multitude of individual cabines dedicated to some of the 15 different sensorial experiences, including facials and massages; an in-water bicycle, balneotherapy, cryotherapy, pressotherapy; and a sauna within an oversized wine barrel, as befits a spa in the prominent Burgundy wine region. 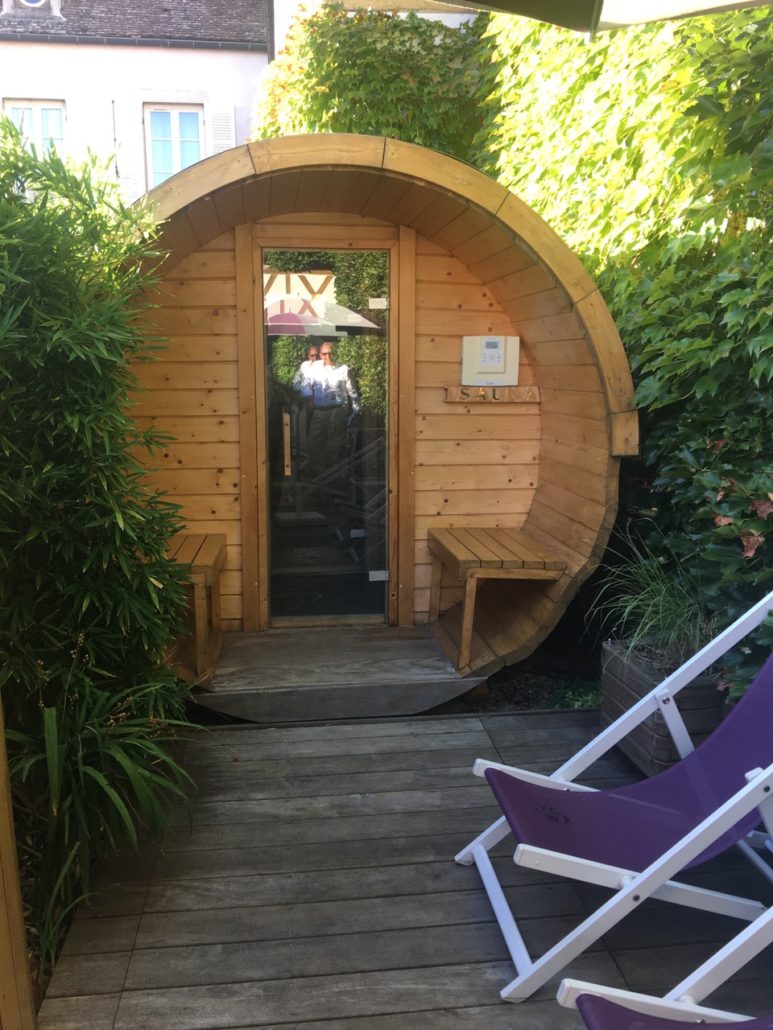 At the time, the wine cave Saint-Felix just opened under the restaurant, down a few steps from the courtyard. This authentic, arched-brick  wine cellar, staffed by a most impressive sommelier and oenophile, Sebastien, served as a tasting room and venue for private gatherings. On the ground floor, and accessible from the street, is the adjoining gastronomical restaurant Loiseau des Vignes, where I ate for the first time in October 2008. I had not yet dined at the original Loiseau, where France’s most illustrious, three-star Michelin chef Bernard Loiseau reigned. After the chef’s premature death in 2003, his wife Dominique took over the business and added Loiseau des Vignes to the portfolio; this warm, independently managed restaurant earned one Michelin star for its exquisite food.

Beaune, the capital of the Burgundy wine trade, is a perfect add-on from Paris, halfway between two notable French cities, each reached via TGV trains from Paris: Dijon 1.5 hours and Lyon, two hours and one train reaches Beaune in two hours and nine minutes. It’s a charming walkable city, where the Hospices de Beaune is decorated with the aforementioned glazed tile roof and where the famous Wine Auction of the Hospices de Beaune takes place each fall. There’s a wonderful market, wine cellars and traditional shops where you can find regional specialties, including blackcurrant liquor, anise-flavored Flavigny candies and honey spice cake. The region’s only private, non-industrial mustard producer, La Moutarderie Fallot (family-owned since 1840) offers a fascinating factory tour and boutique.

While not necessary, you can rent a car for a day’s drive through the Cote d’Or and visit the famous Château du Clos de Vougeot, where Cistercian monks produced wines from grapes grown in a 12th-century walled vineyard. My personal favorite working wineries and vineyards are just a short taxi ride from the hotel: Olivier Leflaive, in Puligny Montrachet, to which some of my fit friends cycled on my first visit there, and the walled vineyard at the exquisite Chateau de Pommard, in Pommard.