It opens (after a winter hiatus) mid-April.

A Lebanese billionaire businessman, Jean-Prosper Guy-Para, designed and constructed this extraordinarily romantic destination. Its intricate tile work, inner courtyards and trickling fountains were inspired by the splendiferous 19th-century Beitteddine Palace in Beirut. What feels like a stage set for Arabian Nights was an ultra-extravagant attempt to woo, enchant and entice Brigitte Bardot, the French mid-century goddess who lived nearby. Unfortunately, the creator’s dream of romance was thwarted by the 1967 Six-Day War, and he had to sell the property shortly after the hotel opened. The buyer was Sylvain Floirat, whose family continues to operate the glamorous venue and maintain its impeccable hospitality: Antoine Chevanne is CEO of Groupe Floirat and Christophe Chauvin is general manager at Hotel Byblos. 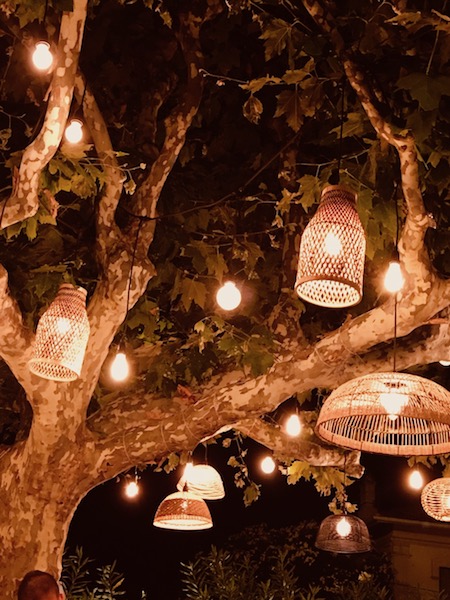 When people ask me about my favorite world destination, I always reply Saint Tropez. So, it’s hardly surprising the allure of Byblos appeals to me and I return whenever possible. In fact, before I ever stayed over, I discovered the bar and lunched poolside on several occasions. Each time I’ve been lucky enough to have a room for a night or more, I’ve dined at its top Ducasse-affiliated restaurant, where the chef is always tops; the ingredients local; the Mediterranean menu sublime; the service pristine; and the ambiance so lovely, diners linger long past midnight.

Last August, we dined late under twinkling lights hanging from grand old trees on the terrace of what is now Cucina Byblos. We met executive chef Rocco Séminara who formerly worked at chef Alain Ducasse’s flagship 3-star Michelin restaurant Louis XV at Hôtel de Paris, in Monte Carlo. The chef prepared a fabulous truffle pizza in the wood-fired pizza oven for our appetizer — he introduced himself as Rocco and showed us some of his kitchen garden: These particular herbs and vegetable plants were growing vertically, peeping through verdant walls surrounding the terrace. After an amazing meal, we climbed the outdoor staircase to the super-chic, music-filled supper club, Les Caves du Roy, midway up the hillside hotel, between the restaurant and the pool terrace. I recalled that a year earlier, even on the first April weekend of the season, the dark, music-filled boite was already jam-packed!

That April, my daughter and I checked in to Byblos when it was less busy, immediately after the spring debut, after its annual winter closure. Rooms in this 5-star hotel are each uniquely configured and one deluxe suite is decorated by Missoni Home. Ours had wonderful wallpaper behind the bed, a living room, a smaller side room with a desk and console for amenities, two bathrooms and two balconies overlooking the landscaped pool terrace. Among some notable details, the fabric-covered electric cords matched the walls so guests wouldn’t see a black TV wire, and a fabric holder on the door for newspapers, so guests won’t have to bend to pick it up from the floor.

Each venue in the 5-star hotel is exciting to discover. One special room, the Salon Libanais, is a stone-by-stone recreation of a Beitteddine Palace parlor. With the simple addition of two massage tables in the middle of a space decorated with antiques, it transformed into what I consider the world’s most sensual couple’s treatment room. There’s also a fine fitness room at Byblos, but the narrow, hillside, boutique- and café-lined pedestrian streets, between the port and the hotel, provide ample outdoor exercise. 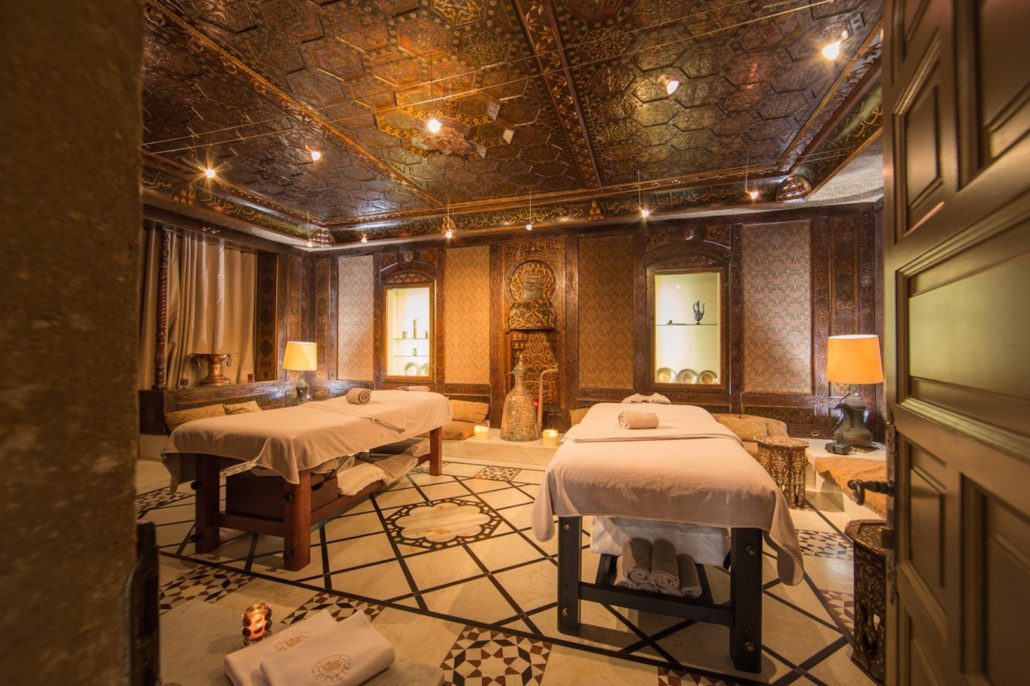 The dreamy multilevel hotel climbs the hillside, each plateau more appealing than the next. The street-side entry to Cucina Byblos is footsteps from Place des Lices, where the famous market takes place in the plane tree-studded plaza in the center of town. The valet awaits at the top level/ automobile entrance on Avenue Signac, near the Citadelle, cemetery and beach (scenic sites that some rooms view). Elevators connect various floors between lobby, spa, restaurants and the terrace; there are plenty of stairs for the able.

My must-do in Saint Tropez: Spend a few memorable moments within the minuscule Musée de l’Annonciade, a former fishermen’s chapel, where paintings by Dufy and Matisse decorate the walls and where one seascape by Signac, an artist who lived in St. Trop, mimics the maritime vista seen through the adjacent window.