Surfers are crazy. Maybe not the certifiable kinda crazy but they will go to insane lengths to catch that perfect wave. For his milestone birthday, my surfer husband, Howard, wanted to surf around the Mentawais Islands in Indonesia. His dream was for our family of five to ride on one wave at the same time. Initially, he asked if I thought our 8- and 10-year-old sons could handle 33 hours of travel time. I laughed and asked if he had met our children. So, instead, we brought only our 20-year-old son.

After much research, Howard chose the small Hidden Bay Resort Mentawais Islands, which only hosts 12 surfers at a time. We regrouped, after 33 hours of travel, in Padang, Sumatra. We spent the night and got to explore the city. Early in the morning, we packed into the Mentawais Fast Ferry with other surfers, visitors and natives for the three- to six-hour ride to meet a speedboat at Siberut, which would take us to the resort. This equals about 40 hours of travel. To surf.

The resort’s long, thin speedboat, nicknamed the “limousine,” landed us on the beach of Hidden Bay Resort Mentawais Islands. A wooden path separated the fine, white sand and led us toward the building they call the Sikerei, after a tribe living in the Mentawais Islands. The path crossed a bridge over a small lagoon with sleeping, pink lotus flowers that opened in the mornings. The Sikerei building, an open air palapa with a thatched roof and shiny, dark wooden beams, is more than 3,000 square feet with three floors of gathering space used for yoga, eating, resting and socializing

Hidden Bay Resort at Mentawais Islands is owned by a Brazilian family: Alexandre “Alex” Ribas, also a surfer, his tall, long limbed wife, Luana Panek, with piercing blue eyes and honey blonde hair, and their adorable daughter, Gaia, who had just turned 2 when we visited. The small family could not be more lovely. Alex’s smile opened his whole, tanned face. His light blue eyes shone with the delight he felt at having us share his favorite place on earth. Luana chased Gaia around, held her at her hip or relaxed as the little girl wandered between guests, stealing hearts with her deep dimples. 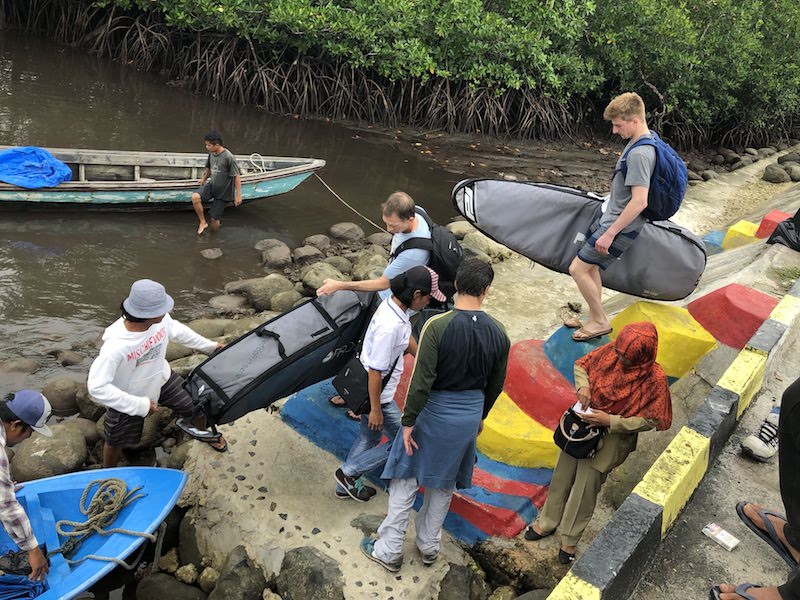 The first couple days, the three of us had the resort to ourselves. Alex likes to hire locals as there aren’t many options for the villagers to earn money so most subsist on the coconuts and fruit they gather and the fish they catch. Alex hired them to cook, bartend and maintain the resort. They brought platters of food to the top floor of the Sikerei when we all ate. Little electric lights twinkled overhead like the real stars, only the real ones numbered in the millions.

Then the Brazilian surfers arrived. When we heard they were coming, I immediately pictured the nutty, loud ones from my teenage years and regretfully expected to kiss our restful vacation goodbye. This didn’t happen. The men couldn’t have been more friendly and inviting. Their love for the sport brought them annually to the Mentawais Islands from Portugal, Spain and Brazil to ride what they considered one of the most perfect waves in the world.

There are 15 surf spots within a 15-minute speedboat ride from the resort. I accompanied the boys and visiting yoga teacher, Ina, on a couple surf trips. Yes, I wanted to cheer for my son and husband, but I also wanted to ride in the boat around the islands. Green seemed to explode from the banks of the land we passed. Although many of the islands had foliage pushing against each other into the ocean, some were better behaved, standing tall with dignity and even allowing a bit of room for sand to spill into the blue water. When we arrived to the preselected spot, I took pictures beside Artie, the professional photographer the resort hired to take videos and photos of each surfer for an optional package they could buy. I then put on fins and a mask and jumped from the top of the boat into the warm water. I kicked away from the waves agitating the sandy ocean floor for a clearer view of ocean life. The quiet beneath the water filled my ears and the tropical-colored fish filled my eyes.

If you aren’t a surfer, there isn’t much to do at the resort and that is perfect for someone who often does too much. The day would start with light yoga, facing the ocean with salutations to greet the rising sun. After the communal breakfast of yogurt, cereal, fruit and juices, plus the best coffee we’d ever had, the surfers would load the thin, long boats with gear and whizz off into the horizon. The resort would suddenly lose its sound. Only birds calling from palm trees and the crowing of roosters, walking around the garden beneath the Sikerei, could be heard with the backdrop of the crashing waves. 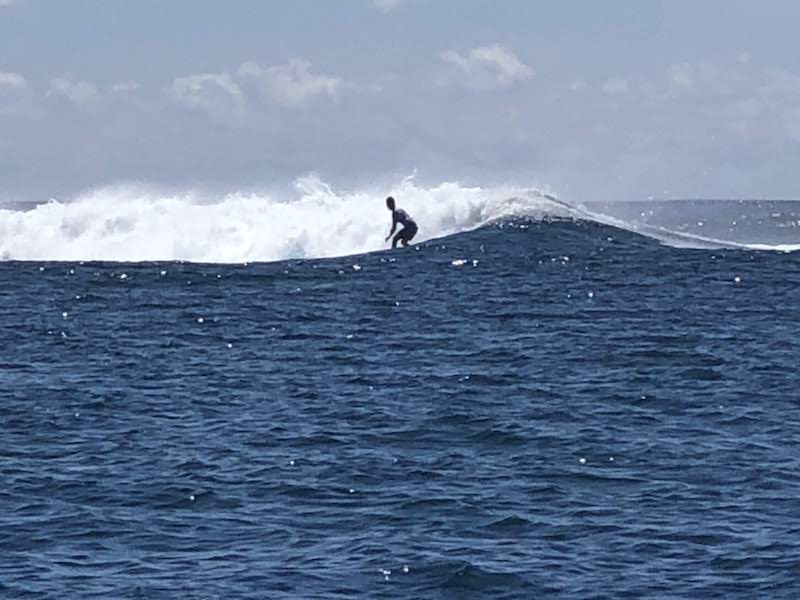 I often bring books on trips I never read. During the 10 days we spent at the Hidden Bay Resort Mentawais Islands, I sat on an Indonesian couch, facing the sapphire ocean, and read more than one. I filled notebooks with thoughts and ideas I suddenly had time to create. When I took breaks, I’d walk along the edge of the water around the island. The sand was covered with shells that looked like the protruding bones of the island. Hundreds of crabs click-clacked their way across these piles of seashells. I never made it all the way around because a large river eventually blocked my passage but I did walk by huts and natives living their lives. They seemed surprised and pleased to see me, one stopped from the work of shaping the bottom of a canoe to wave and smile, another with coconuts strung to her back smiled a toothless grin, bobbing her head up and down in greeting.

Guests could take fins and a mask to kick around the water outside the palapa. We could bring a stand-up paddleboard and cruise from spot to spot exploring the unspoiled water and the sea life within. Once, we took a ride behind the “limousine” with a board attached to the back that allowed us to sail underwater, covering much more area than we’d be able to see on our own.

In the evenings, the surfers would gather in front of the television, in the back of the Sikerei, to watch videos from the day. Initially, I thought this was to admire themselves but there was instruction shared by Alex and the other surf coaches to help improve their techniques. 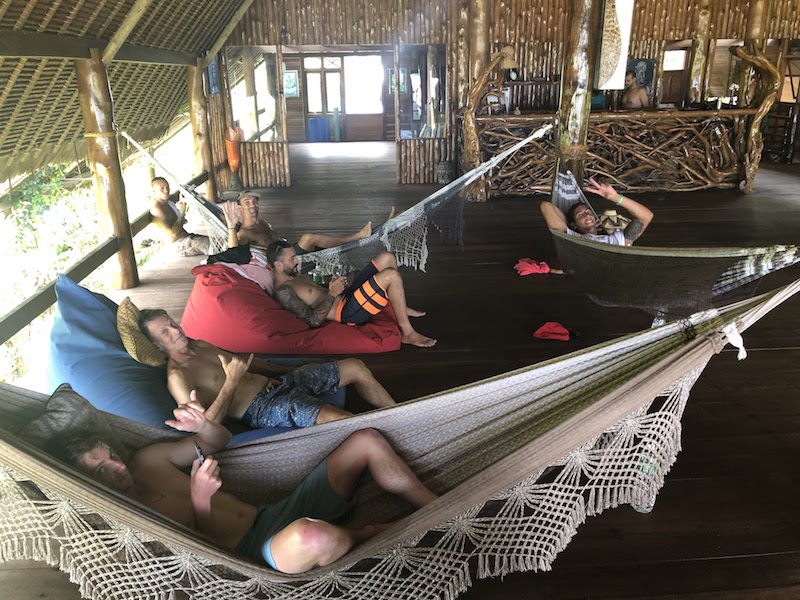 Luana also offered affordable massages, a joy after the two daily surf sessions the boys experienced. Ina led yoga in the mornings and some private Pilates classes for me in the afternoons when she returned from riding waves. Once she returned with giant gashes on her shoulder and foot from the sharp reef and one of the other surfers, Diego, had a bleeding hole in his head from another surfer’s board. The resort had a first-aid kit to deal with minor abrasions but they took the boat to a nearby island to see a doctor just in case. They came back dazed and stitched up. Luckily, this all happened toward the end of everyone’s trip. I thought the next and last full day, they’d stay with me, recuperating at the resort but no. They took their wounds back into the ocean so not to miss that last opportunity to ride those perfect waves. Crazy.