With the ease the Long Beach Carnival Cruise Terminal brings to cruising out of Los Angeles, taking your parents and kids on a trip can be the relaxing experience it’s actually meant to be. No need to wrangle with airlines, simply drive to Long Beach, park your car and board your vacation. A floating entertainment vessel that stops in exotic locations, designed to have something for everyone AND keep them all in one place sounds like the perfect family experience.

But the many offerings on a cruise ship can become overwhelming. We’ve narrowed down the best activities for a multigenerational trip on Carnival’s Imagination cruise to Catalina and Ensenada and selected the ones we loved the most during our recent trip.

The first thing you need to do is download the free Carnival app. Everything is broken down by times and activities so you won’t have to remember anything and it even sends you an alert when something you’re interested in is about to start.

The app will tell you the correct time of the all-ages comedy show in the Xanadu Lounge to attend with your kids. There are two — and the later one has lots of potty talk and when your two kids enthusiastically sit in the front row, the emcee will kick them out in a way that’s funny to everyone but them. When you do go to the all-ages comedy show, though, you will love how much your kids laugh and won’t feel as guilty for encouraging them to sit in the front of that last show.

There are also great music acts in the evenings. Not Vegas-worthy but still impressive. We went to Playlist Productions’ Epic Rock show in the Dynasty Main Show Lounge. The stadium seating-style lounge was spacious and the stage presentation was bright and impressive. The 1970s and 80s hits were way before my 7and 9 year olds’ time, but we adults loved it and even the boys were rocking out by the end. 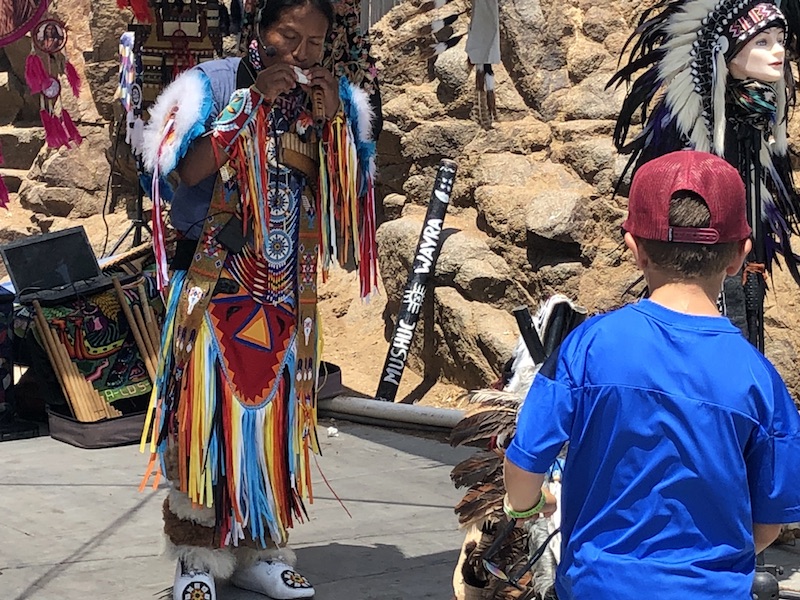 When it wasn’t windy, the boys loved putting around the miniature greens on the top of the ship. There is nothing more exotic than aiming that little yellow ball toward the hole surrounded by an endless ocean of blue. When asked, the boys said this was their favorite activity.

The water slide was surprisingly mellow for how high and long it is. The boys complained it wasn’t scary enough, but I think it’s the perfect mix between thrill and sanity. Even a middle-aged mom could scream going down and keep the phone camera steady along the way.

The kids club is divided by age group and they’re super good about security. They took a picture of the boys and scanned their room-key/wristband each time we checked them in and out. They gave us the option of letting them check themselves out, but we didn’t take it. It’s nice to know where your kids are. At first, I wondered if there were enough activities offered to keep my high-energy boys entertained. But they begged to go back after every excursion. They loved making friends there and, weeks later, they still remark how nice everyone was and wish they could see them again. There’s something special about summer friendships.

It’s genius. Everyone loves the tongue twisting, frolicking characters Dr. Seuss brings to life. And now you can have breakfast with those characters in a tasteful, color parlor, sea-side water sort of way! For $5 per person, Dr. Seuss’s characters will step out of his books to visit while you devour colorful creations at the Green Eggs and Ham Breakfast. They’ll also pose for pictures with the very kids you read his books to! In the afternoon, you can gather with the same wacky characters and have a Seuss-A-Palooza Parade down the length of the ship, banging objects willy nilly until you get to the main show stage, transformed into the world of Dr. Seuss and a book is brought to life. Actors are drafted from attending kids and your kids could find themselves cast in the role of Sam I Am or Horton or the Who while costumed crew members read the story out loud.

Being from Los Angeles, I wasn’t thrilled at the prospect of visiting Catalina as the first stop on the cruise. I visited a handful of times before but I had never gone with kids. We booked a parasailing excursion through the ship with California Parasail. My mom didn’t want to go so, to include her, we later went on a submarine ride with Catalina Adventure Tours to explore the world beneath the sea around Avalon.

The parasailing was surprisingly calm. My mom could easily have done it. It’s eerily quiet 800 feet in the air and, because it’s a double strap, I got to share the view with my son, on his way to tweenhood, so it was a lovely bonding experience.

The submarine offered a view of more schools of fish than I remembered there being when I snorkeled around Catalina as a kid. Maybe it was because you can cover more ground in an underwater vessel. The part my boys loved best was when they were able to “launch the torpedo” of fish food to the attending Calico Bass, Opal Eye and Tiger Birch fish. It was a palm-sized, glowing red button beneath their port window that they got to push each time they wanted to feed our new friends. The ensuing mosh pit of frenzy to get at those floating pellets was a bit alarming but also somehow exciting. 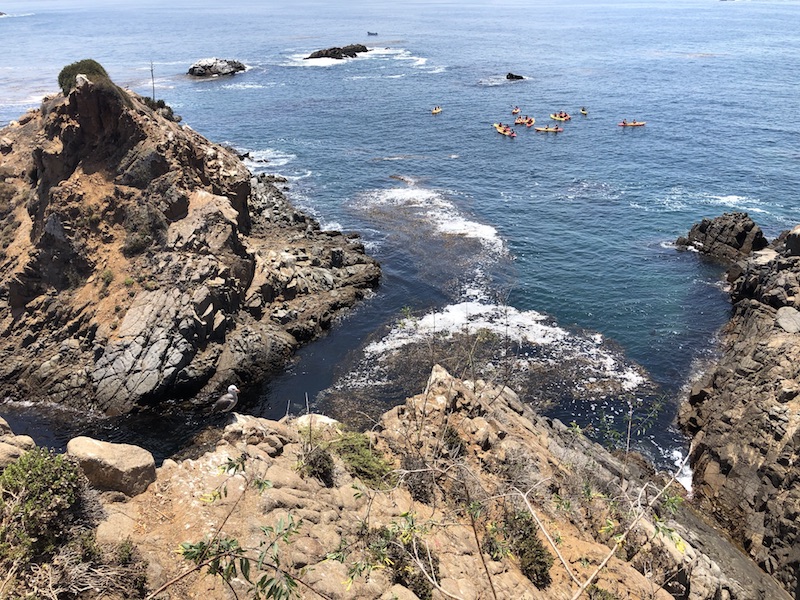 The best part of our Catalina visit was the recently installed, free, floating water park just off South Beach off Avalon Blvd. You have to swim to get there and I hadn’t brought my bathing suit off the ship so, not to miss the fun, I bought one. I’m so glad I did because climbing onto the floating cubes and running across the obstacle course was one of the best, unexpected experiences we had as a family. I tried to get a photo of us all going down the slide together but we kept either falling off at different times or I couldn’t get everyone together at the same time perching at the top. Grandma, on shore, acted as photographer.

In Ensenada, we wanted to do the off-road Jeep wine tour, but one of us would have had to drive and wine and off-roading was not a good combination, so instead, we took the La Bufadora Tour. La Bufadora is the second-biggest marine blowhole in the world, the first being in an inaccessible location in New Zealand, our guide Ron told our group on the bus on the way there. We weren’t particularly excited about seeing a blowhole, but we did love the history of Ensenada Ron humorously shared with us on the way there. Ensenada and Tijuana were most popular with Americans during the Prohibition when they could come across the border to the casinos.

A small street, that starts at a dirt parking lot, leads visitors to the blowhole. Shops and restaurants line both sides of the sidewalks, offering souvenirs like cowboy boots, carved animals and wrestling masks. Locals, armed with serving trays, offer drink and food samples. Don’t forget to bring small bills so you can negotiate good deals. Also, if you pay with your credit card, make sure to check the exchange rate so you’re paying the amount you expect.

Our guide told us about a restaurant called Habana Banana that rescues baby animals abandoned by their mothers and raises them until they are 6 months old before releasing them into the wild or giving them to zoos. I wasn’t able to verify this story but it is legal to own wild animals in Mexico and the boys got to go into one of three plate-glassed rooms in the restaurant with two baby lions and a tiger. One of the caretakers, Angelique, a student at a university there, seemed to believe the story and told us the money they raised from tourists who wanted to cuddle with the animals helped offset the expense of taking care of them. Again, people have mixed feelings about wild animals being kept in domesticated situations but, from our observations, the animals were treated well and behaved like any kitty or puppy, nipping and scratching lightly at the boys, and seemed to love the attention. It’s an experience the boys will never forget.

Besides bonding and creating fond memories, having a grandparent join you on a trip also means you have a built-in, trusted babysitter so mommy and daddy could get that alone time which, in some cases, is also a fond memory. There is a nightclub on the boat and we went dancing, stopped by the casino and laughed at the adult jokes in the later comedy show. It was a nice experience to reconnect not only with grandma and the kids but also with each other.

With Christmas right around the corner, Anantara Hotels, Resorts & Spas properties around the world invite travelers to catch a glimpse of Santa Claus before he makes his way back to the North Pole.

Through Jan. 6, 2022, families can experience the many wonders New York City’s PaleyLand has to offer this holiday season. Run by The Paley Center for Media, PaleyLand is a beloved event featuring countless holiday events across four floors to get everyone into the holiday spirit. PaleyLand is open 12–6 p.m., Wednesday to Friday, and 11 a.m.–6 p.m. Saturday and Sunday. Advanced ticketing is encouraged.