Beyond the gilded luster of Venice lies a melting pot of culture and gastronomy ripe for discovery. Friuli-Venezia Giulia — Italy’s most northeastern region, which shares a border with Austria and Slovenia — is a gastronomic gem that produces much of the country’s highly sought-after wine, cheese and prosciutto.

A mere 90 minutes outside the Floating City, Friuli (as it is more commonly called by locals), easily explored by car, serves as the perfect destination to wine and dine several days away. Towns lie close together, and each offers a unique experience that represents the diversity of the area. Boutique B&Bs abound, ranging from rustic to elegant, yet all with distinct personalities of their own. 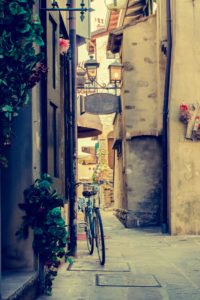 Although one of Italy’s smaller regions, Friuli always maintained a strategic role connecting Italy to Central and Eastern Europe. With wildly diverse geography for such a small area, the mountainous north juts up against the Alps; the eastern section borders Slovenia and, although quite hilly, produces much of the wine; the southern border lines the Adriatic Sea; and the west becomes more shallow and sandy as it eases into the tourist territory of Veneto.

Roman origins laid the foundation for Friuli, but influences from the Austro-Hungarian Empire firmly remain, evident in the rich culinary scene. Divided into four regions — Pordenone, Udine, Gorizia and Trieste — Friuli proves an interesting region to explore from architectural, geographic and gastronomic perspectives.

Palmanova, in the province of Udine, is the perfect town to begin your journey. A concentric city built in the shape of a star, it was designed to be a Venetian military station on the eastern frontier as protection from the Ottoman Empire at the end of the 16th century.

Designed by Vincenzo Scamozzi, Palmanova featured all the military innovation available at the time. A fortress built in the shape of a nine-pointed star, Palmanova’s ramparts protruded so all points could defend each other by offering opportunities to crossfire and attack from multiple angles. A moat encircled the town, and it was then said to be an ideal Renaissance city.

The city’s founding date of 1593 commemorated the victory over the Ottoman Turks in the War of Cyprus, and 100 years later Napoleon led a second phase of construction to create an additional layer of fortification. Today, Palmanova shines as a well-preserved gem, perfect for history buffs, anchored by a town square and quaint cafés like Caffetteria Torinese and delectable pastry shops like Nonna Pallina.

Tourists are a welcome sight in this small town, received with open arms by proud locals eager to share the history of their unique home. Allow time to chat, and should you find yourself at Al Gambero, be prepared to visit with the affable owner over a glass of Prosecco as you sample his sun-dried tomatoes and olives, morning or night. 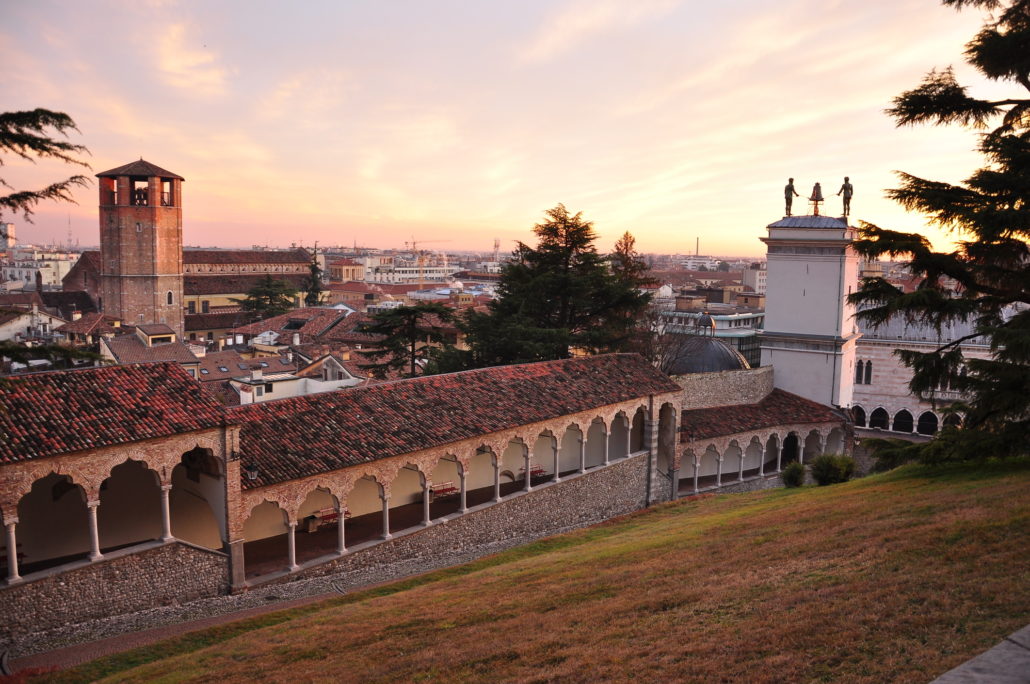 The next stop on your family’s tour of Friuli should be the town of Cormòns in the province of Gorizia, where roughly 10 percent of the population is ethnically Slovene. The D’Osvaldo family is rooted in tradition here, as it has been curing hams since 1940.

In Italy, the two most widely known prosciuttos are prosciutto di Parma and prosciutto di San Daniele, yet in Friuli, prosciutto D’Osvaldo reigns supreme. Importing the process of smoking hams to preserve the meat from Eastern Europe, Giacomo D’Osvaldo began a tradition that would be passed from father to son for four generations.

In an antique villa that dates back to 1800, guests can visit the D’Osvaldo Prosciutto Factory, which doubles as the family home, and see how the ham is preserved and smoked among a balanced mixture of cherry and laurel logs, which add a hint of sweetness to the prosciutto.

Deep in the hills of Cormòns, in an area dubbed the Collio, La Subida is a rustic, family-run eco-resort that boasts a humble, Michelin-starred restaurant among cabins in the forest. Owned and operated by the amiable Sirk family, La Subida offers an experience akin to visiting relatives who take good care of you from the moment you arrive. La Subida’s rustic wooden cabins feature modern amenities and bring the outdoors in with floor-to-ceiling windows. Dinner at the on-site Trattoria is a must, as the family makes most items from scratch and offers an exceptional presentation of regional cuisine.

Josko Sirk, the patriarch of the family, is passionate about vinegar making, producing wine vinegar made with whole grapes on his property. After three to four years of sharpening in small casks, Sirk’s vinegar is sulfite-free and bottled without any filtering processes or tampering, which he will proudly tell you during a tour of his vinegar house.

The next day, as you make your way north through Friuli, head to La Frasca for lunch at vintner Valter Scarbolo’s restaurant near Lauzacco. Just off the main highway, its cozy and inviting ambience makes it easy to spend four to five hours lingering over 12 delectable courses paired with Scarbolo’s first-rate wines.

Moving on to Cividale del Friuli, check into Orsone, a luxurious concept that consists of a bed and breakfast, a taverna and a restaurant. The vision of mother-son restaurateurs Lidia and Joe Bastianich, Orsone sits among the family’s vineyards and offers the perfect respite in an idyllic setting. 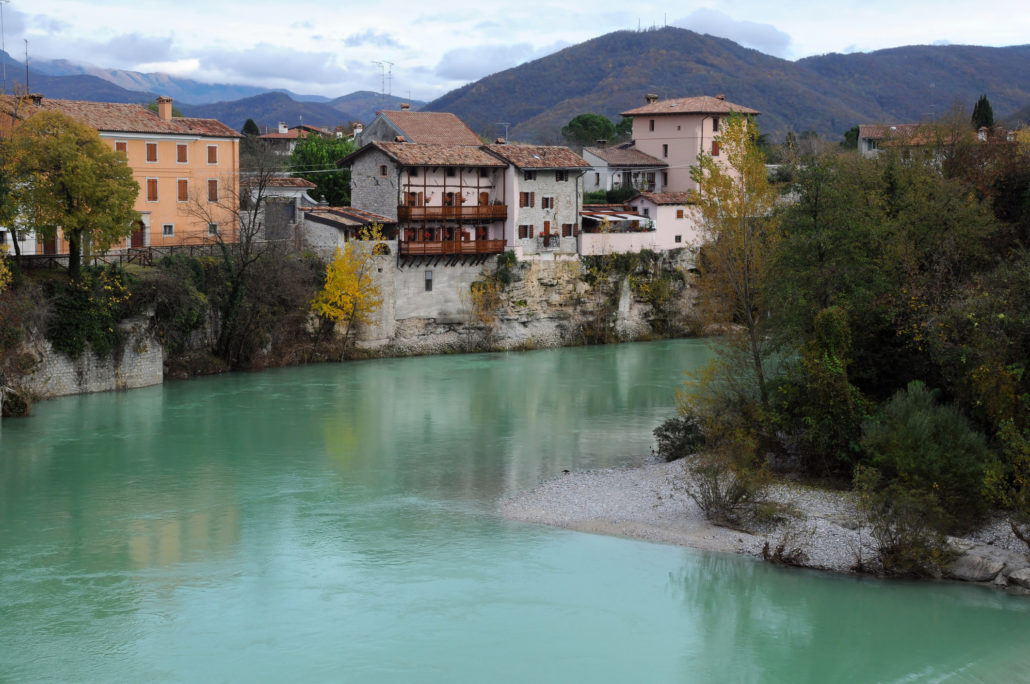 Before dinner, venture into the heart of Cividale del Friuli. Park outside the city center and walk over the Ponte del Diavolo (the Devil’s Bridge) that crosses the Natisone River, forming a picturesque ravine as you enter the town. Head toward Caffè del Corso and rub elbows with locals over an evening spritz, the ultimate Aperol cocktail and popular Italian aperitif.

Dinner at Orsone is elegant and comfortable, especially if you are seated by the roaring fireplace. An international staff offers perfectly choreographed service, and Bastianich wines complement each course. The best aspect of dinner at Orsone: You can pace yourself and enjoy the ambience since you simply need to walk upstairs and are home for the night.

After a hearty breakfast at Orsone the next day (make sure you try the torts di ricotta), make your way to Dolegna del Collio, where the Venica family created a sprawling estate part winery, part B&B and part family home. More than 80 years ago the family began growing vines and fruit trees together. The farm sustained the family’s needs first, with the excess sold to restaurants in the area. Eventually, future generations discovered a way to tap into the natural biodiversity of their crops and create balance and unique character in their notably complex wines.

Giampaolo Venica represents the Venica & Venica brand globally, bringing Friulian wines to the masses while also encouraging guests to taste his family’s wines and stay at their picturesque B&B. While not only offering the perfect base to explore other wineries in the area, Venica is also an expert ambassador for the region, which won’t remain under the radar much longer.

Cruising is among the best ways to see a region’s highlights without the hassle of driving, foreign languages or changing hotels. But veteran cruise passengers often get a lot more value from their experience than first-time cruisers simply because they know the ropes.