Near Da Nang, Vietnam, a pair of colossal hands crafted from what seems to be moss-covered stone reach upward from a verdant valley, to all appearances gently holding a curving pedestrian bridge up above them. Called Cau Vang in Vietnamese (known variously in English as the Golden Hand Bridge, Giant Hand Bridge and Vietnam Golden Bridge), this iconic structure is actually made of steel mesh and fiberglass, and is accessible via cable car in the Ba Na Hills Park.

Vietnam’s other bridge worth traveling to is also located near Da Nang, and spans the Han River. The Dragon Bridge is a six-lane structure and more than 2,000 feet long. Twice daily, the giant, rippling golden dragon that parallels the length of the bridge becomes interactive art, breathing fire for several minutes, followed by a display of gushing water. The Fire and Water Performance can be viewed from various riverfront cafés, hotels and tour boats in the river.

Conceived by artist Robert Owen, the Webb Bridge above the Yarra River in Melbourne, Australia, was inspired by traditional Koori fishing traps, and occupies a space once used as a railway crossing. Serving as both a pedestrian and cycling bridge, the spiderweb-like metal structure curves back upon itself across the water in a startling visual that begs exploring. 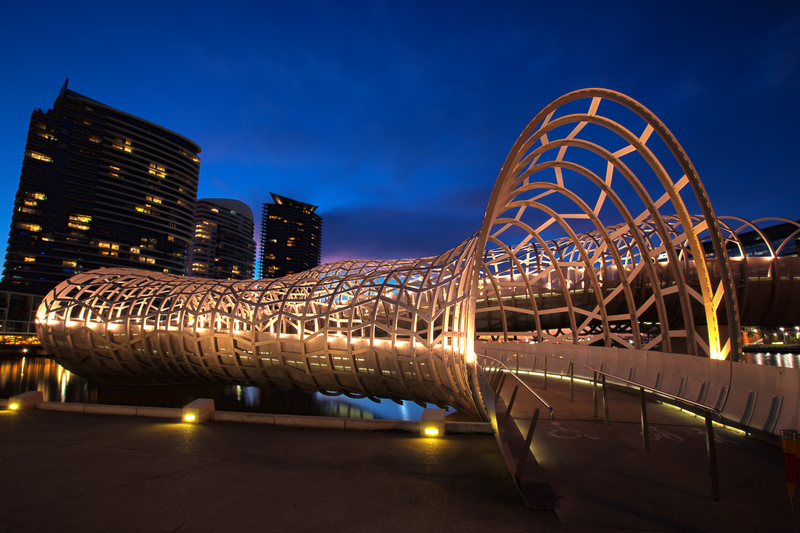 Smaller in scale but equally inviting, the pedestrian bridge over the Mur River in Graz, Austria, was designed by New York artist Vito Acconci. The steel and glass structure, which resembles a winding seashell, is both bridge and performance space. A central floating platform houses a café, amphitheater and playground.

In Madrid, Iowa, the High Trestle Trail Bridge adds a strong artistic element to the recreational High Trestle Trail linking the towns of Ankeny and Woodward. The bridge rises 13 stories high, and is suggestive to those approaching on foot or by bicycle of a mining shaft entrance. Lit from the interior with blue LED lighting, and with a geometric steel framework, the bridge’s landings were created to evoke images of exposed coal seams. The bridge won numerous awards for architecture, design and for its status as an emblem of public art.

Best appreciated from the exterior, the concrete and metal Beehive Bridge in New Britain, Connecticut, gleams in a golden, luminous honeycomb pattern above Route 72. Giant bee sculptures guard the entrance at either end — a fitting image for a city whose seal includes a beehive and the motto “industry fills the hive and enjoys the honey.”

It’s time to start dreaming of your next family trip. Here’s some destination inspiration for you. Take a visual journey through Minneapolis, Minnesota, with us.