Nearly every ski resort in Italy has an area for beginners, but a number go the extra mile. Some resorts offer magic carpet lifts, dedicated beginner terrain, children’s centers that combine ski lessons with child care, or long gentle cruisers the whole family can enjoy. Some have special ski runs for children complete with cartoon characters and kid-friendly challenges to improve their technique. Lodging is easy to find, with family-sized rooms and suites at luxury hotels or modest inns and ski lodges.

The resorts below are especially accommodating to families.

In the spectacular Dolomites, a UNESCO World Heritage site, Cortina D’Ampezzo became a jet-set favorite after it hosted the 1956 Winter Olympics. Known for its day-long runs from the top that end almost at hotel doors, there’s also plenty here for beginning and intermediate skiers. Half the skiable terrain is rated intermediate and there are slopes and trails for beginners, including several gentle woodland trails. Off-slope activities include a lighted taboggan run and ice skating.

Also in the Dolomites, Alta Badia is less-well-known, but just as good for families, with gentle terrain for beginners and about half of its trails rated as intermediate. More relaxed and less crowded than Cortina, Alta Badia’s main village of La Villa has a good range of facilities and lodging for families.

In the Aosta Valley near the French border, the low-key resort of La Thuile will delight older kids who can ski over into France for a day of international skiing. The ski school and childcare facilities are in Fantaski, an entire snow park designed for children. Snow here is usually excellent for early and late season vacations, perfect timing for school breaks. 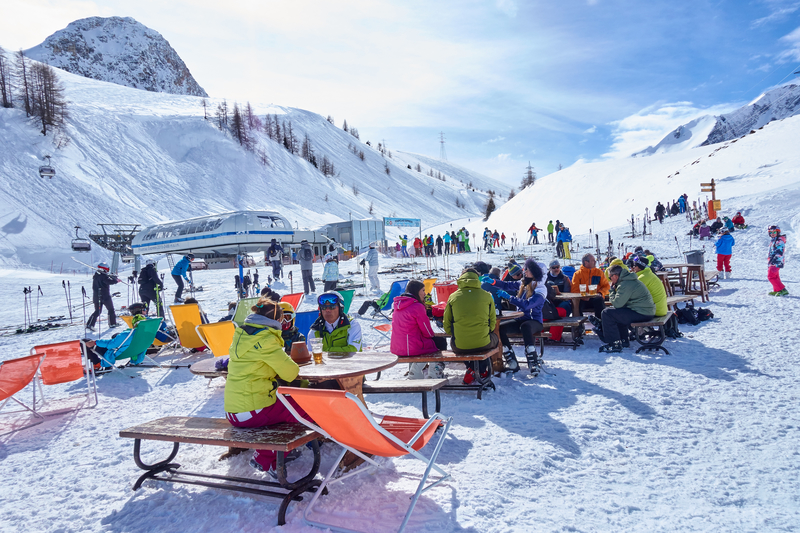 In the heart of the Dolomites, Alpe di Siusi is another place you can depend on snow from December through March, thanks to 100 percent snowmaking and excellent grooming. One of the most family-friendly resorts in the Dolomites, it has plenty of terrain for intermediate and beginning skiers, along with ski school, kids’ fun parks, children’s ski tours and child-safety features on lifts. Boarders will love the excellent snow parks with steps, boxes and kickers.

Ski buses that carry families from their hotels in the traffic-free village to the lifts are only part of the attraction for families at Sauze d’Oulx. Near Turin and one of the resorts in the Savoy Alps known as The Milky Way (you can ski at several of these on one Milky Way ski pass), Sauze d’Oulx is heavily intermediate, good terrain for families skiing together. While parents ski with older children, the youngest ones can spend the day at the Sportinia area’s ski school and play center.

In the Brenta Dolomites, north of Lake Garda and Verona, Madonna di Campiglio is known for its superior snow grooming and for the Ursus Snow Park for boarders and freestylers, one of the best in Europe. Ski lifts begin in several villages, each of which has practice slopes and children’s areas. The Folgàrida Family Park has multiple moving carpets, a carousel and super-easy slopes for children just beginning to ski. Both here and at the Marillandia Marilléva children’s area are supervised by professional ski instructors and special packages for families include lodging, ski passes and ski school.