The Southampton Inn, a 90-room retreat in the sophisticated South Shore Long Island village of Southampton, feels like a private club. It’s located in an estate area in town, where guests can walk to movies, boutiques, restaurants, galleries and even to the beach.

On Oct. 27, guests can stroll to Agawam Park for the annual Ragamuffin Parade. And the inn provides a van which transports guests to various venues, including for pumpkin picking at Hank’s Pumpkintown,.

From the front entry at Southampton Inn, you can walk up a ramp to reach reception, where bags of books written by local authors await interested guests. Then, wander back to a large, high-ceilinged library, where sofas face each other fronting the fireplace. There’s a separate seating area across the room, a piano and a game table. Doors open out to a large wrap-around deck, which leads via landscaped garden paths to a poolside patio and swimming pool, to a tennis court, verdant lawns and rooms facing the picturesque scene (others are reached from and face the landscaped entry drive). 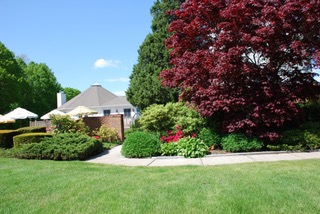 Behind each outside entry door, there are two downstairs and two upstairs rooms. Among them, some have king-sized beds, others are dual queen-bedded, some add sleeper sofas and a few rooms are reserved as pet-friendly accommodations. (There’s a $49 surcharge per pet.) Mine was decorated with white, wooden, country-contemporary furnishings: headboard, desk and bureau with a love seat at the end of the king-sized bed. It had a beachy comfort and was practical: Bureau and end tables provided lots of drawer space; the bureau served double duty as a television stand and the two-door closet hid a small fridge. It was also family-friendly, because a door connects it to an adjoining room.

For meals, there’s day-to-dinner dining inside restaurant Claudes, located on a lower level and reached via stairs or elevator from reception, from a separate front entrance or past the herb garden from the courtyard café. The long, well-designed space has a small bar at one end and a nearby seating area, where sofas turn the corner around a large coffee table and round tables, with comfy club chairs, line the outside wall. It’s an inviting spot to linger over a drink.

The affable chef Carlos Cortes specializes in Italian and American cuisine and is popular for his Mediterranean fish dishes. His gazpacho and zuppa di pesce are popular and I particularly enjoyed sampling an appetizer he made: tuna two ways, with sliced seared tuna, a tuna tartare with avocado, a dollop of wasabi and sauces. Later, at dinner, he prepared my favorite clam dish: clams posillipo. I was served at least a dozen, small steamed clams in an aromatic, garlicky, olive oil-enhanced clam broth topped with a grilled, herbaceous flatbread. I also had steak that night, served precisely as rare as requested and with wonderful whipped potatoes. The restaurant offers a popular brunch and a children’s menu with kid favorites served with a drink and fries.

Although Long Island is definitely considered car country, and for good reason, Southampton is one of its  best walkable destinations, and easily reached via Long Island Rail Road or Hampton Jitney. Coopers Beach, a 500-foot slice of sand and dunes which Dr. Beach named one of America’s top 10 Beaches in 2017, is only one mile south of the inn, reached on a beautiful walk past grand homes, half hidden behind tall, manicured-hedges and curved, color-bedecked driveways. And, the major historic and cultural venues in town are an easy walk from the hotel: The Southampton Art Center for its exhibits, the Southampton Cultural Center for its performances and The Southampton History Museum, where — among the 12 buildings that will appeal to young people — there’s also a costume exhibit in the Rogers mansion, “High Style in the Gilded Age 1870-1930.”

Many agree, Southampton is loveliest when the summer throngs have left.

Florida’s oceanfront Shelborne South Beach, an iconic and glamorous 1960s destination, was revamped for 21st-century families. Its fanciful allure — and fabulous pool and tropical beach access — is an exciting family destination in the heart of the historic and walkable Miami Art Deco District.

Although Alaska may not be on everyone's radar, it might move higher on your family’s must-visit list when they learn more. There are countless activities and breathtaking sights throughout the state, plenty of wildlife to see and much more, whether you spend time in the top tourist areas or venture off to explore Alaska’s hidden gems.

Stop and Smell the Flowers at Amsterdam’s Bloemenmarkt

As I wander the canals of Amsterdam on a bright spring morning, the sun plays on the water as shoals of cyclists navigate the tight streets. The city’s inimitable narrow houses teeter overhead, and one particular street erupts in a riot of color as the De Wallen red light district gives way to the Singel canal to the south.

Harvard Medical School released a study that mothers and daughters who take at least one trip together per year have less stress, stronger immune responses, decreased risk for heart disease and more. That’s right: It turns out spending quality time together provides benefits similar to sticking to a healthy diet and getting enough sleep every night. And, let’s face it, traveling is a lot more fun.