As you drop from the lip of a wooden half-pipe, your body whipped up by gravity as the tube curls back and launches you, spinning and flying into the air, your kids finally realize just how cool you really are. This may not be you, but the guys who broke bones in the 70s and 80s, trying to land those perfect tricks on their skateboards or bikes, who crashed into the merciless concrete of empty pools, are all grown up now and have kids of their own. Like most parents, they want to teach their children what they know but they also want to protect them from getting hurt. The solution is Woodward, the most state-of-the-art, indoor/outdoor extreme sports park with 12 locations across North America. My son and I attended the opening of Woodward Park City in Utah on Dec. 14, 2019.

Woodward began 50 years ago in Pennsylvania as a gymnastics training facility. Its program naturally progressed into extreme sports, gaining popularity in the 80s, offering kids a safer way to learn BMX biking and skateboarding. Woodward invites all kids into their camps and classes, from the never-before-tried-it to the Olympics and X Games competitor. Woodward facilities offer courses in skateboarding, scootering, BMX biking, mountain biking, cheerleading, parkour, tubing and snowboarding. The different areas are divided into zones. There are Zone Coaches in each of the offered activities who train kids and offer tips based on their extensive experience. Woodward also extends classes in digital media for friends to get those stunts in action.

My 11-year-old son, Kaleb, is just getting into scootering and skateboarding and loves to watch Camp Woodward on YouTube. The show follows the lives of young extreme athletes as they test their skills and friendships at that first Woodward location in Pennsylvania. 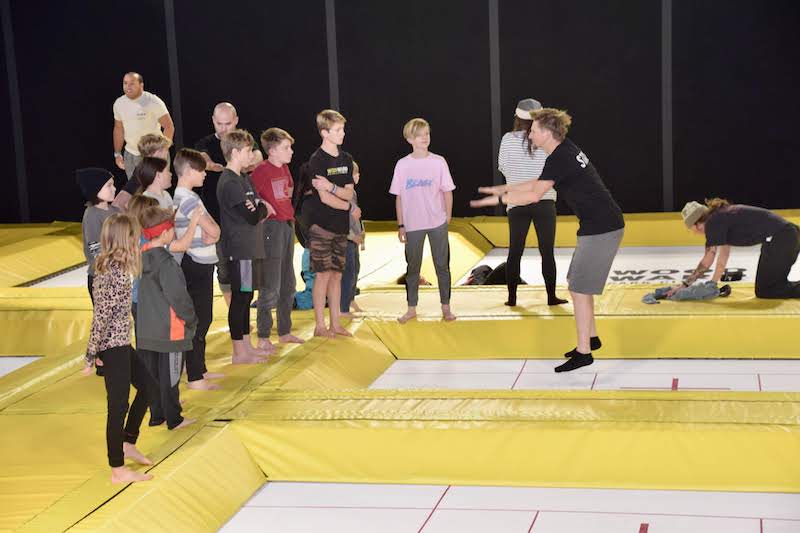 On opening day, we walked into the indoor section of the 125-acre Woodward Park City campus, called the Action Sports Hub. The community long anticipated the kick-off of this new entertainment and fitness complex, so lines formed early. As a gift to the surrounding cities, Woodward opened their doors for free to the public and donated 100 percent of their earnings to local charities.

First, we followed a group gathered for a tour. We watched pro athletes Tony Hawk, Tyson Bowerbank and Lyn-Z Pastrana, as well as some of the kids from the Camp Woodward show, Zion and Roman, do skateboarding tricks in the Concrete Park. Parents and guests have an observation area right above the action where they can ooooh and ahhhh to their heart’s content while the athletes push their limits. Utah’s alcohol laws are tight, but there’s a bar a few steps from the viewing platform where parents and spectators can order food and drinks.

We headed over to an exhibition where athletes roll down what they call the Mini-Mega, five ramps, of various sizes, with a ramp that shot up at the end, launching the daredevil into space with a soft landing into a pit of foam bricks. Although riders performed many of the stunts on bikes, there were also Woodward-designed snowboards and skis, with wheels on the bottom, to simulate what it would be like to attempt their leaps out on the actual snow outside. As athletes completed multiple flips in the air, while holding onto their sports equipment, the throng surrounding the area regularly dropped their jaws in astonishment. When regular guests perform these feats, they can scan their ID wristbands, before and after take-off, to automatically film themselves with the Woodward video camera, capturing their progress and celebrating their shredding abilities. 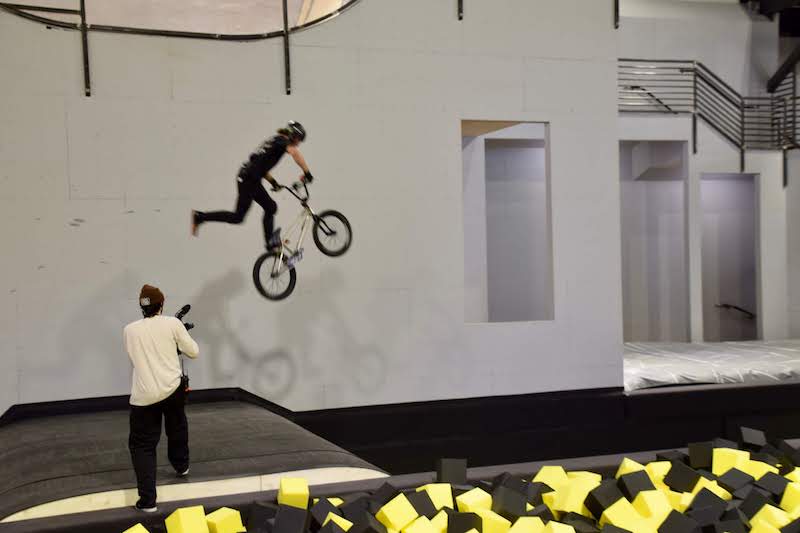 Above the Mini-Mega, bikers and skateboarders raced back and forth on the Pump Track, a length of wood floor undulating like waves with rails and a wall to attempt tricks. The Pump Track, and many of the elements around Woodward, are put together by legendary ramp designer Nate Wessel and California Skateparks ,who also build the parks for the X Games and Olympics.

“The whole experience is designed to be a progression,” said Ali Goulet, the legendary pro-snowboarder and our guide for the day. Goulet and every coach that works for Woodward has a professional background in these extreme sports. “I get to teach and guide the next generation,” he said. 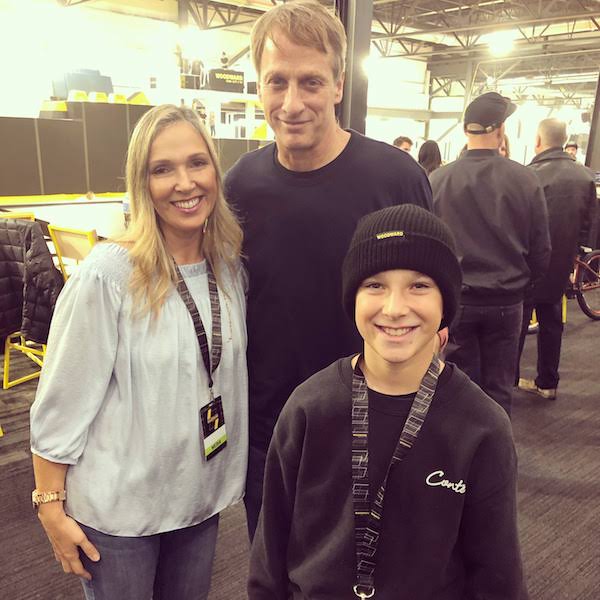 Goulet called Kaleb over to follow him from the mind-bending ramps of the Mini-Mega over to the training area for it; two long concrete rooms connected by a wall opening. A mini-ramp and foam covered stairs and rail filled one side and two smaller half-pipes dissected by a foam spine set the other. There, a pack of tweens practiced tricks on scooters. Goulet found a scooter for Kaleb and after a bunch of prodding and a hearty invitation from the older boys, my not-usually-shy guy finally joined them. He watched for a while and then took off from the top of the little ramp toward a wall with a curve at the bottom. He stopped himself before his momentum took him up the wall. He did this a few times between the flips and mid-air scooter rotations executed by the more experienced boys. I walked away to give him space as Goulet was telling him ways to navigate the wall once he felt secure enough to get there.

Around the corner, a launch ramp the size of a large living room led to a giant air pillow that absorbed the impact after bikers and skateboarders hurled themselves into the air above it as they practiced tricks. 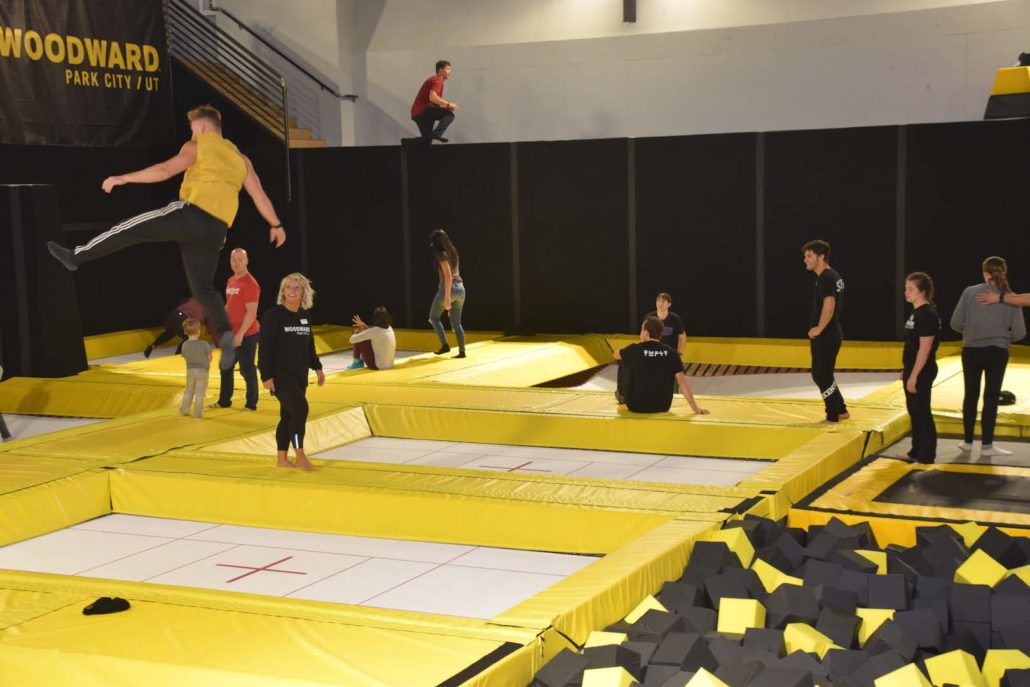 The outdoor portion of the complex, the Mountain Park, hosted snowboarders, skiers and tubers on trails and runs. Ski lifts and magic carpets brought kids and adults of various skill levels up the mountain. Jumps, rails, moguls and snow-packed quarter-pipes presented challenges athletes practiced in the indoor hub and were now ready to try on the real deal. In the summer, this area utilizes its lifts for mountain bike activities.

A friend from Los Angeles recently moved to Park City with her husband and triplets and we made plans to meet at this community grand opening. I found her with her kids on the padded floor, coaches separating a pack of excited, young athletes into smaller groups to get their first experiences around Woodward and to tour all the other floor zones, Parkour, Trampoline and Acro. I watched as one tiny figure, maybe 6 years old, jumped off a two-story platform into a foam pit. It turned out to be the daughter of extreme athletes Lyn-Z and Travis Pastrana. But Woodward is a place for all types of kids, including those with special needs. My friend’s children were born premature and have dealt with physiological challenges their whole lives; however her son held the hands of a Zone Coach who gently guided him while he jumped softly on a trampoline. His brother, on the other hand, flew what appeared to be 20 feet into the air on another trampoline behind him. The Trampoline Zone offers seven trampolines, two of them called Super Tramps, the largest trampolines in the world, where jumpers bounce three times higher than on a normal trampoline so they could learn aerial tricks that can’t be done anywhere else. Around us, cheerleaders practiced mid-air tumbles, kids somersaulted down foam wedges and some ran headlong into more foam pits. A DJ played bumping music above it all on a raised floor. 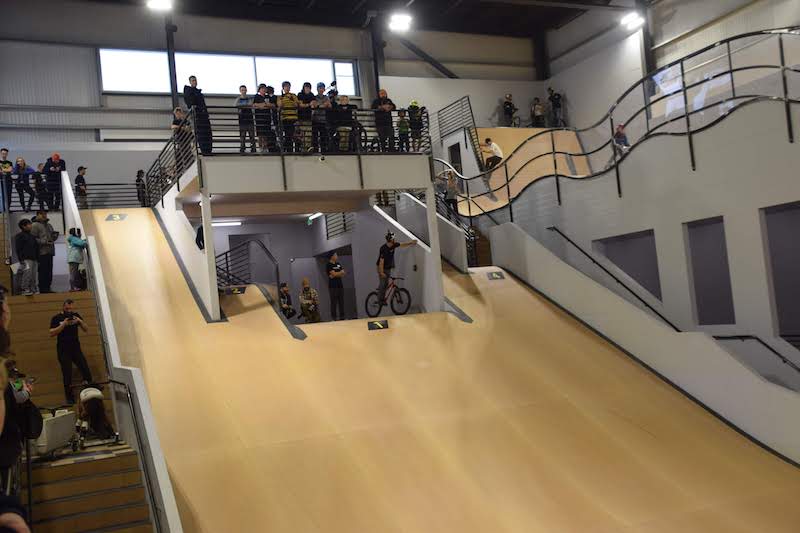 I found Kaleb still practicing on the scooter, with the other boys rooting for his progress. He went down the mini-ramp, even doing a little jump in the middle of his ride. He got to the wall and twisted his body to carve an arc onto it as he turned his scooter back toward his new friends. The other boys high-fived him when he returned to the line-up. His smile beamed with increased confidence and my heart melted.

Even if you’re not out there dropping down a five-story platform on your BMX or buzzing around kidney-shaped bowls on a skateboard, the fact you know of a place where your kids could learn to do that makes you more cool than your kids ever thought possible.