The site of the 1969 Stonewall Riots, Stonewall Inn is one of the most iconic spots to visit. An escape for the LGBTQ+ community in the 1960s, it was also frequently raided by police until the protest and riots in 1969, which saw the emergence of gay pride parades soon thereafter. While the Stonewall Inn took on a variety of businesses in the following years, it was once again made an LGBTQ+-friendly bar in 2007. 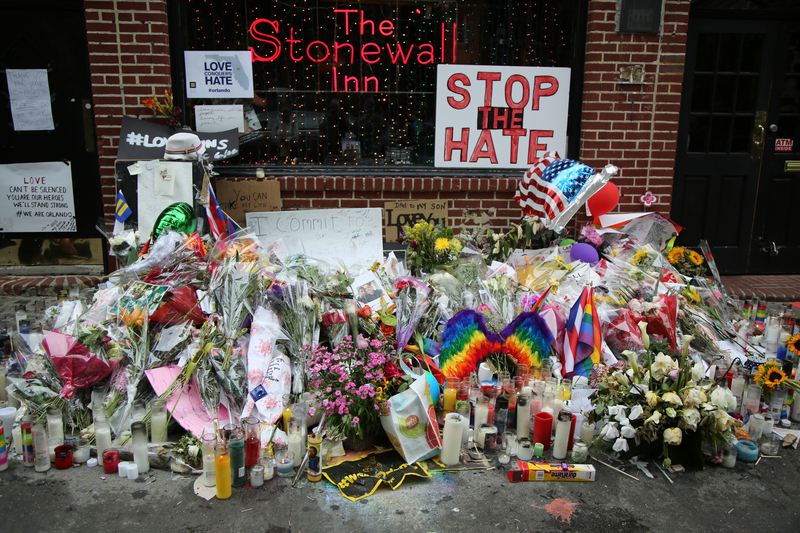 In 2013, this monument, three pink benches in the shape of a triangle, was the first in Israel to honor both Jewish and non-Jewish people.

A similar monument remembering homosexuals persecuted by the Nazis can be found in Berlin. The Nazis used pink triangles to identify homosexual men and black triangles for lesbians. The symbol now honors those individuals in Sydney, Australia, at the Sydney Gay & Lesbian Holocaust Memorial, which features a soft glow at night, and in Sitges, Spain, near Barcelona, where the Pink Triangle Monument reads “Sitges stands against homophobia — never again.”

San Francisco is also home to the Women’s Building, the nation’s first women-owned and -operated community center and the San Francisco Federal Building, a crucial landmark in raising AIDS awareness.

Located in Sackville Gardens, the life-sized bronze statue honors the man who cracked the Enigma code and led the Allies to victory in World War II. Turing was later chemically castrated because of his sexual identity.

Also in Europe, Amsterdam’s “Homomonument” was erected in 1987. The three granite triangles commemorate those persecuted by the Nazis, as well as all members of the LGBTQ+ community facing government persecution today.

A half-mile of the North Halsted corridor in Chicago is an outdoor history museum. Ten pairs of 25-foot tall rainbow pylons boast markers commemorating people and moments in LGBTQ+ history. More markers are added each year on National Coming Out Day, Oct. 11.

Chicago is also home to Henry Gerber House; Gerber is considered the “grandfather of the American gay movement.”

In 2015, this became the United States’ first memorial to victims of anti-trans violence and a place to celebrate transgender lives.

Another memorial in the United States is Pulse Interim Memorial, in Orlando, Florida. The temporary memorial will be replaced by a permanent commemoration to the 49 lives lost in the deadliest targeted murder in LGBTQ+ history, which occurred at Pulse Nightclub on June 12, 2016.