One of the biggest drags about traveling is the brain fog that develops when your body clock crosses several time zones. During a trip and after, jet lag can suck the life, or at least the energy, from you for days. Who has time for that? We moms and dads have to hit the ground running to keep up with our rascals!

When I recently traveled to Indonesia with my husband and stepson, we tried an experiment to see which of the natural remedies we had would work best. My husband would do acupuncture, I would do acupressure and my teenage stepson would look at us like we were crazy and do nothing. He would be the control group. 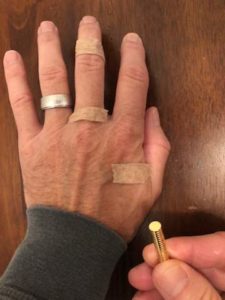 My husband had been seeing Dr. Stephen Stiteler, who practices acupuncture with powerful little magnets placed around the hands. He gave my husband a sheet to follow where he would tape the magnets in various positions around his hands. He would relocate the little magnets every two hours based on the different time zones we’d fly over. Yes, he could stop if he were to fall asleep but then resume upon awaking. Did this work? Yes. My husband felt fine when we arrived in Padang and we were able to enjoy our evening before we set out to our next destination in the morning.

I recently attended the Travel and Adventure Show where I met scientist and lecturer Dr. Charles Krebs, who claimed he found the cure for jet lag. Tired of losing effective time between his travels from Australia to other countries, he discovered a way to reset his body’s internal clock and alter its biorhythms through acupressure. His friends marveled at his success and begged him to share his secrets, so he created an easy-to-use app called UpLift. UpLift asks travelers to input their departure destinations and time they left as well as their arrival time and place. Based on that, acupressure points are assigned and a video can be played to show where to find the exact spots. Yep, for $9.99 a year you can relieve jet lag. Did it work for me? Yes. The first time and every time I’ve remembered to use it after, I literally felt my eyeballs pop open as I finished my second set of points.

My stepson did none of these techniques and he was fine in Indonesia, but I suspect that had something to do with the unusual amount of surfing he did when we arrived. However, upon our return, he was a zombie, so there you have it. Overall, I found it much less of a commitment and way less time intensive to use the UpLift app when we arrived than to keep repositioning the magnets through the whole plane ride. However, my husband said the magnets did work, so, really, it’d be up to the user to decide. And, of course, drink tons of water because plane travel dehydrates your body. Also, caffeine and alcohol are diuretics and make it worse, so you might want to consider waiting until you arrive without jet lag to your destination before you start partaking.