Over the Rainbow: The Saguaro Palm Springs

Roughly a decade ago, several of Palm Springs’ favorite old-school haunts, such as The Avalon Hotel, received a fresh coat of “Hollywood Regency” glamour that would make Frank Sinatra and his fellow mid-20th-century Rat Pack swoon. And baby, it was hardly the kind of “retirement” scene people once associated with the desert community two hours outside of Los Angeles and San Diego.

The late 2000s brought back the cool flair and sunlit color schemes of that earlier time. However, more people got to go to the party, from newly minted L.A. hipsters just out of college to Palm Spring’s stylish LGBTQ+ community to young families wanting to experience the past and future of the Coachella Valley in the days just before the word “Coachella” became a global cultural phenomenon.

At The Saguaro, which adds an irreverent twist to the retro-chic vibe of Palm Springs, the party continues throughout the year. Its Mexican restaurant, El Jefe, is a local favorite for good reason — its artsy south-of-the-border dishes and beverages taste as good as they look. There’s also historic interest, as the 244-room property was repurposed from a motel originally built in 1964 for visiting families.

Kids will immediately be hooked with the most progressive and inclusive “Barbie Dream House” in existence, as well as the giant Jenga game, ping-pong tables and free rental bikes arranged inside the front lobby. Teens and adults can enjoy free yoga classes offered daily as well as a nice little fitness room. The interiors of the private rooms are just as much fun, decked out in Crayola-bright hues with views of the pool area.

In addition to day-to-day chilling, the property also stages several fun events making the most of Palm Spring’s colorful and arty vibe, from She’s Crafty classes hosted by the Coachella Valley Art Scene and outdoor movie nights to Taco Tuesdays and Thursdays at El Jefe. 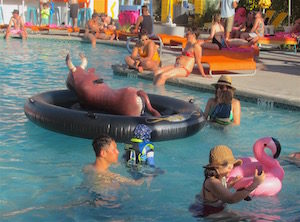 Though the pool, the hotel’s internationally photographed aquatic focal point, can get a little crazy (especially in summer with a post-Coachella Festival deluge of bachelorette and graduation), parents with toddlers and elementary school-aged children will find the hotel’s almost utopian mood welcoming. Families on holiday I encountered during my stay came from as far away as Shanghai, China; the United Kingdom; and Japan; and as nearby as San Diego, Los Angeles and Baja, Mexico.

As The Saguaro is just a few minutes’ drive or a free shuttle ride (when available) to downtown Palm Springs, it’s easy to take advantage of several all-ages dining opportunities along Palm Springs Boulevard, such as Lulu’s (known for its mix-and-match four-course special for $20) and The Draughtsman (whose best menu item is a flawless grilled cheese sandwich for kids of all ages).

However, for what’s perhaps the most authentic taste of Palm Springs, be sure to include Thursday in the plans. On Thursday nights, Palm Springs Boulevard is closed to traffic for its weekly street fair, which includes local artisans, street musicians and the best street food in the area, including The Tamale Guy (amazing vegetarian options) and artisanal sweets makers (Suzy Q’s Sweet Things, Robertson Roasted Almonds, Brandini Toffee) who tempt passersby with samples. What really makes the weekly festival a treat is the opportunity to mix with local families as interesting and colorful as the facades and interiors of The Saguaro. The local pride here is infectious.