The situation reminded me I’ve long been accumulating information about Rail Trails. In 2018, I discovered the Missisquoi Valley Rail Trail in St. Albans, Vermont; last fall, I stayed at Buttermilk Falls Inn, about seven miles from the Walkway Over the Hudson. And, I recalled a memorable day in Bermuda, which started with an early morning walk on the Railway Trail. When I started researching U.S. rail trails, I discovered something extraordinary: Rails-to-Trails Conservancy.

Consider these destinations and, if they aren’t convenient to where you live, I hope you find an alternative venue for your family to walk, hike or bike.

The Rails-to-Trails Conservancy announced a cross-country, multiuse trail, known as The Great American Rail Trail, that will run 3,700 miles from Washington, D.C., across 12 states to Washington State. At the moment, 50 is a key number for the route: It’s more than 50 percent completed (1,900 miles) and 50 million Americans live within a 50-mile radius of it. The route will link several gateway trails: Capital Crescent Trail, Chesapeake & Ohio Canal National Historical Park, the Panhandle Trail, the Hennepin Canal Parkway, the Casper Rail Trail and Palouse to Cascades State Park Trail.

The Missisquoi Valley Rail Trail attracts folks who walk, cycle and even snowshoe along its 10-foot-wide, 26-mile stretch of crushed stone. The former rail line was beautifully transformed into a narrow, manicured and well-signed, all-season hiking and cycling path that winds along the picturesque river, through rural villages, verdant farms, forests, fields and wetlands of Franklin County. It roughly follows State Route 105, from St Albans City — the two-square-mile city with a village feel — in northwestern Vermont, to nearby Richford (between Montreal and Burlington, Vermont). 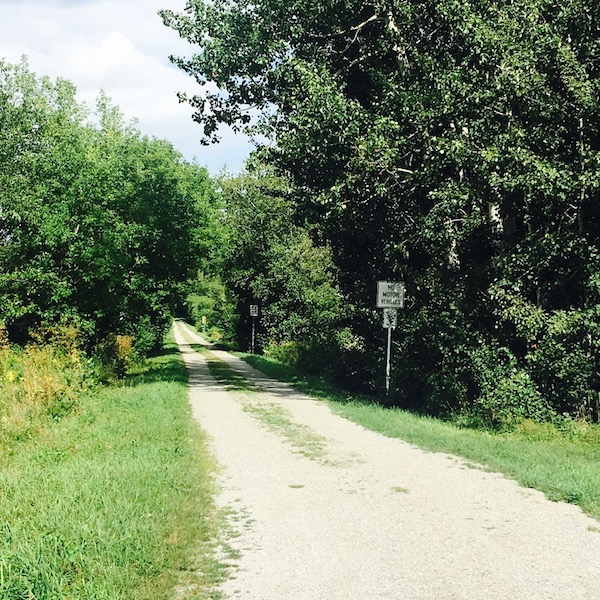 Keep this magical venue in mind for future travels, assuming you may not live in Bermuda or have a yacht on which to cruise there. The Bermuda Railway Trail dates 1931–1948, when trains were the primary transportation on the island. Old Rattle and Shake, as it was called, operated from St. George’s Station (east) to Hamilton to Somerset Station (west). In 1964, the right of way was transformed into a trail for walkers and cyclists; in 1986, it was designated as a National Park. Access is available to 18 of the railway’s original 22 miles, though some sections are only accessible on foot. My two-hour, flat, scenic walk from Cambridge Beaches Hotel & Spa, near the Royal Naval Dockyard, was an exquisite way to appreciate the island’s natural beauty.

Walkway over the Hudson

The Walkway over the Hudson State Historic Park spans the Hudson River between Highland and Poughkeepsie in upstate New York for a distance of 1.28 miles. It’s the longest elevated pedestrian bridge and part of the Hudson Valley Rail Trail, an abandoned part of the New York, New Haven & Hartford Line. This paved, four-mile, east–west rail trail stretches from the Hudson River through the hamlet of Highland; a route through hardwood forests, over Black Creek and under two spectacular stone-arch bridges.

Enjoy the opportunity to move, get out and about, enjoy each other, the natural world and, in some places, learn a bit of railway history.

Navajo Nation is an area of land in the southwestern United States. Covering about 27,000 square miles, the region in Arizona, New Mexico and Utah currently makes up the largest area of land retained by a tribe within the United States. Home to the Navajo people, the area boasts monuments, parks, markets, trails and historic sites.

Wearing sunscreen at the beach is a given, especially for little ones running in and out of the water — and anyone who forgets that usually regrets it with a vengeance the next day. One aspect of sunscreen I admittedly didn’t think about until just a few years ago is how detrimental its impact is on marine life and reefs. Oxybenzone is a chemical found in most mainstream sunscreens — it works to prevent sun damage, but is also carcinogenic and harmful to coral. The chemical makes coral more susceptible to bleaching and damages its DNA, interfering with reproduction and killing dependent marine life in the process.

An interesting and accidental beneficial side effect of recent travel bans is that large swaths of the world affected by over-tourism are beginning to heal themselves. Major cities from Los Angeles to London and Beijing are reporting their best air quality in years with less nitrogen dioxide and carbon dioxide emitted by cars and industry. The canals in Venice are so clear, schools of fish and even a dolphin were easily spotted by locals — all of this and more taking place before Earth Day’s 50th anniversary in April.