Remaining Open Minded During a Shutdown (and Other Unfortunate Events)

When things take an unexpected turn, many will quote a line from John Lennon’s “Beautiful Boy (Darling Boy)”: “Life is what happens when you make other plans.” The line fits the recent government shutdown, which descended on the American public during the holiday season and lasted over a month, though it is probably not the situation the former Beatle had in mind.

While the possibility of another shutdown or national emergency was looming at press time, the longest shutdown in U.S. history will have a continuing impact on travel — from the closing of national parks to the impact on government employees critical to the travel industry taking a financial hit, including air traffic controllers, TSA officers and those working at the nation’s government running monuments, parks and cultural sites. Even when that dramatic situation was resolved, many of the sites’ problems were not.

Safety for air travel may still be a concern, according to Andrew Schrage, CEO and co-founder, Money Crashers, a financial advice website.

“While some government officials said there was no effect from the shutdown, many TSA workers refused to come into work,” he notes. “Your best bet if flying is to be more aware of your surroundings and report any suspicious behavior. When packing for a flight during a shutdown, be sure to follow the ‘3-1-1’ rule to avoid making the security wait line even longer. Any liquids must be in container that is 3.4 ounces or less, and placed into a quart-sized freezer bag (one bag per passenger is allowable). The good thing is that baby formula is exempt from this rule.” 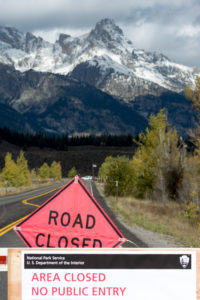 If a trip cannot be canceled or postponed, counter-programming and a touch of empathy are in order when salvaging your family’s together time and investment. As some national parks may still be closed or running at skeleton operations, Schrage suggests checking ahead of time to see if a given park or site is re-opened or fully operational, and doing online searches to find alternative entertainment options for the zip code you’re visiting.

“Although a government shutdown or crisis will have an effect on travel, that doesn’t mean that your upcoming trip should be impacted as long as you take the right steps in preparation,” he said. “Attractions that can replace national parks or monument sites will vary depending upon where you’re visiting. Use a website like TripAdvisor and do a search or query for ‘lesser known’ entertainment spots where you are visiting, and Groupon, which will not only yield results for interesting attractions but also provide vouchers you can purchase for 50% off or more of the admission fees.”

Visit North Carolina offers the latest news, tips and resources on camping in state parks, ways to view national park highlights (like the Great Smoky Mountains) when park facilities are closed or limited, and information on the state’s 11 wildlife refuges open and accessible as the national parks still recover from the winter shutdown. It also offers suggestions on alternative museums and landmarks to visit. For example, while the Fort Raleigh National Historic Site was closed, Elizabethan Gardens and Roanoke Island Festival Park were recommended as they offered a similarly satisfying look into the history of America’s first English settlers. While the Wright Brothers National Memorial was closed, visitors could explore the namesake aviators’ airborne adventure at Jockey’s Ridge State Park.

The Utah Office of Tourism, meanwhile, endeavors to draw prospective visitors by emphasizing the state parks are Utah’s tried-and-true gem, so much that the state funded state parks during the government shutdown even as a local company invested funds to keep the “Mighty 5” national parks (Zion, Arches, Canyonlands, Bryce Canyon and Capitol Reef) open throughout the shutdown. That said, Utah’s 44 state parks are gems waiting to be discovered, with lesser-traveled but equally magnificent landscapes to explore.

“Parents can tell their kids that our country is funded by the national government, and when problems arise, travel plans could be affected,” says Schrage on turning changes in travel plans into teachable moments. “It should be a basic civics lesson, but not one directed toward the politics involved in the shutdown. Empathy for federal workers should absolutely be emphasized, and giving a little shout out or ‘thank you’ to any such workers you come across would show your children a great example of how to be empathetic.”

Father’s Day is right around the corner and Destin-Fort Walton Beach, Florida, is ready to help you spoil and celebrate the great men in your life. Destin-Fort Walton Beach is home to 24 miles of sugar-white-sand beaches and emerald waters with plenty of dad-favorite experiences and activities for the perfect Father’s Day celebration. With nearshore and offshore fishing to unique water adventures and delicious dining options, there are endless ways to celebrate dad.

With vaccinations now available to young teens, we wanted to celebrate our newfound freedom to travel with our teenager, Mary. As we considered where to go, June’s unusually warm weather immediately made Mary think of Maine’s beaches, uncrowded before the summer tourist season.

Get out and explore this Father’s Day in a new destination. After being cooped up for over a year, we all deserve a nice getaway. Check out these hotels offering celebrations just for dad!

After the past year, no one really needs an excuse to get away and go on a well-deserved vacation. Whether you are looking for a weekend family getaway or a week-long trip, Virginia Beach is the place for you. With brand-new amenities, offers, activities and more, you can’t go wrong.

Families can enjoy the nostalgia of summer camp without tents, bugs or rain during Great Wolf Lodge’s Summer CampIn celebration, offering several exclusive, limited-time offerings alongside the resort’s indoor waterpark with slides, rafts and water play areas for all ages.

A summer favorite for sports enthusiasts is tailgating before the big game. Whether it be baseball, soccer or football, bringing the right items for an awesome day can be hard, and it’s important not to overpack. These are the things you want to make a priority on your tailgate list.