Where Families Should Stay, Dine and Wine in Juneau

Back when the Earth was still moving and shaking and glaciers and volcanoes shaped the world, sheets of ice carved their way between the ocean and mainland Alaska to create Gastineau Channel. It is this stretch of water between Juneau and Douglas Island that is perfect for cruise ships to dock and seaplanes to land and bring families to explore this still wild land.

Juneau is accessible only by sea or by air. There are no other ways to get there. There are no roads that lead to the capital of Alaska. Perhaps that’s why it’s managed to remain pristine, despite the nearly 2 million visitors that descend upon this small town yearly and double its population of 32,000 during the summer months. 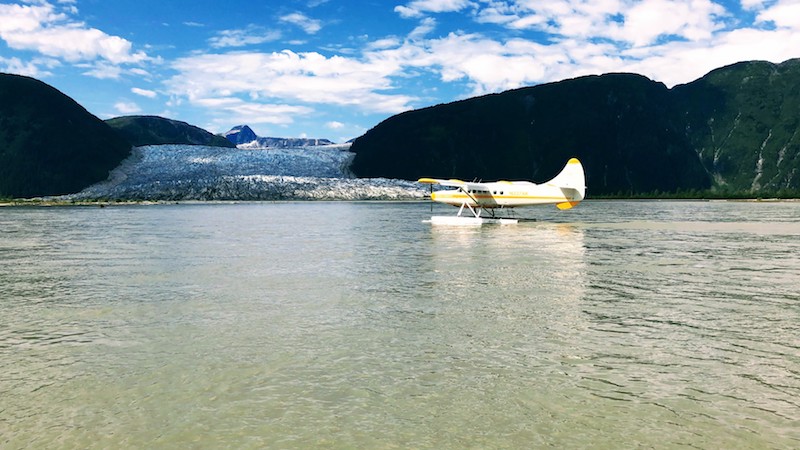 Daylight floods the land for 15–18 hours between May and August with temperatures that slide between the 60s and mid 70s, making Juneau the ideal place to visit the civilized outback of Alaska before your family cruise. This is exactly what our family of four opted to do before our epic sailing on the S.S. Legacy with UnCruise.

We stayed at the conveniently located and friendly Four Points by Sheraton Juneau. We must have brought the Southern California weather with us. When we checked in, the temperature outside was in the upper 80s. This small town with 230 days of some type of precipitation isn’t used to that kind of heat. The front desk lady smiled broadly as she wiped her brow and offered to let us choose between two rooms. Not typically needing air conditioning, the hotel had fans blowing in hallways to try and keep guests cool. Both rooms were terrific. The first had a view of the seaplanes taking off and landing on the channel. We could also see the massive dock where three cruise ships sit patiently while passengers shop and eat. Across the street was the bright blue Historic Merchant’s Wharf, shops and restaurants overlooking the smaller docks of yachts and small-ship cruise lines. A mountain wall, thick with blazing green bushes and trees, framed the front window of the other room. Since the rooms were otherwise identical with two queen-sized beds, an entertainment center with flat-screen TV and sofa chair, we opted for the shadier one. 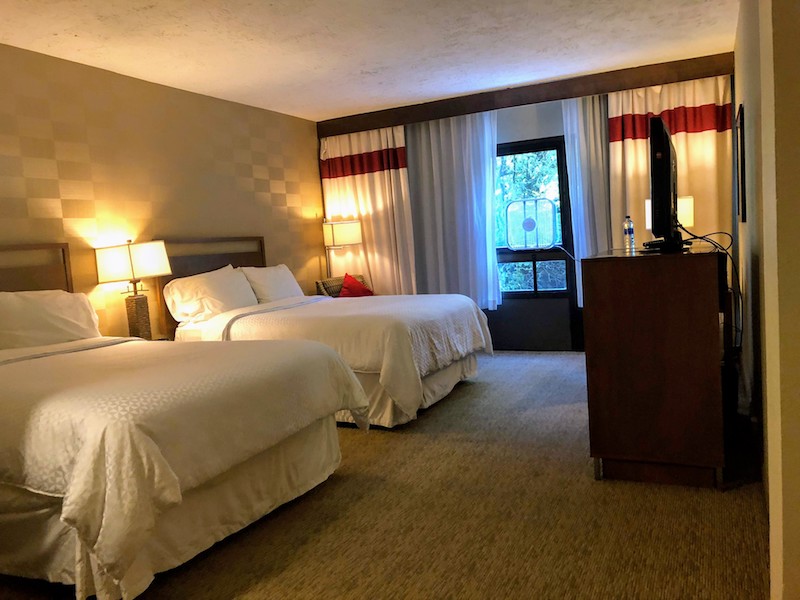 After a day of travel, we were eager to explore downtown and find something to fill our bellies. The still snow-capped mountains surrounding downtown Juneau dwarfed its earth-toned buildings. All the structures appeared as if from another era. I expected Auntie May to stroll out from one of the stores, wiping her hands on her apron, and invite us inside. Instead of questioning the concierge or using our smartphone to find a good place to eat, we asked a man on the street. He recommended the fish tacos at Deckhand Dave’s and told us we could find it at the food truck-like outdoor eatery located inside Franklin Food and Brew Court. Although normally my boys are not fish fans, they said the fish tacos at Deckhand Dave’s were the best they’d ever had and we ended up eating there four times during the three days of our visit. Deckhand Dave’s is just a shack, only large enough to accommodate a college-aged Alaskan and a cash register. Outside, families and locals sat in a semi-covered courtyard around wooden tables placed on rock- and dirt-covered ground. Other shacks in the plaza sold handmade soaps, ice cream, crepes and Mexican food, but once we got a taste of Dave’s fish tacos, we never wanted to try anything else. Salmon, halibut or rockfish are Dave’s choices. Grilled or beer-battered are the preparations. With or without cabbage, secret sauce or cilantro are the options. There’s a beer stand, too. There’s something special about biting into a fresh fish taco and washing it down with a cold beer in Alaska. 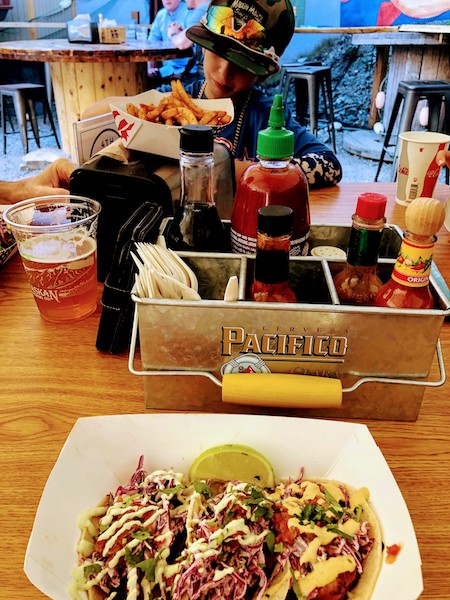 For breakfast, I liked The Rookery Café for the avocado toast and coffee. The dish, with its dukkah nut and spice blend set over lox and roe, tasted uniquely Alaskan. Luckily, options like French toast and muffins made the kids happy. Though if you want to make them REALLY happy, take them to Sandpiper Cafe. Don’t be in a hurry if you go there, it’ll be crowded. There’ll probably be a wait, but it’s worth it. The menu is huge and creative. The portions were plentiful, fresh and delicious.

At the Historic Merchant’s Wharf, we enjoyed a sunset dinner on the deck of the seasonally opened Alaska Fish and Chips. Oyster shooters, overlooking the channel waters bookended by furry hills, never tasted so good. We topped them off with crab cakes and Caesar salad.

Another fun, not to miss favorite is Tracy’s Crab Shack. Yes, you can have a pound of crab legs served in a bucket with a pair of pliers to tear into the meat right as you disembark from your cruise ship but, if you have the time, you should eat it at the other location. About a 10-minute walk, at 300 Whittier St., this location has a huge grassy area with shaded picnic tables. There’s a fishing boat in which to take pictures and streamers of knick knacks keeping the mood lively.

However, if you’ve had enough fish, you can try another local favorite, El Sombrero. El Sombrero was authentic for a Mexican food restaurant nowhere near Mexico. But it was small, so expect a short wait and they only serve beer and wine, no margs. 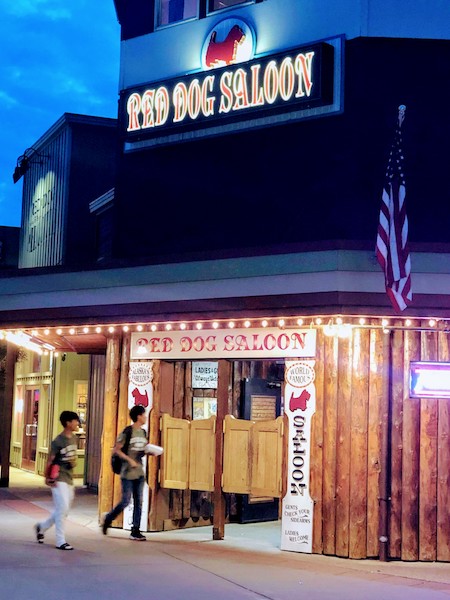 It can be hard to get away from the kids for some adult time, but some bars will allow them inside. The biggest surprise for us was a gin joint called Amalga Distillery. First of all, gin? We didn’t realize how good gin could be until our recent trip to Finland so we were excited when a local told us about this place. They serve only gin at Amalga Distillery, but with really pretty, unusual combinations of fruits and earthy elements inside. The light and airy location has long tables and couches to kick back. It’s popular with locals and allows well-behaved children. We sat on a loveseat opposite two former teachers who’d relocated to Juneau from here and there and told us how much they loved Juneau.

Another place to try is Red Dog Saloon. Kids are welcome here, too; “as long as they’re yours and as long as they’re with you” is their policy. Started in the gold rush mining days, this saloon makes every effort to take visitors back to those pioneering days. Walls are decorated with vintage signs, deer heads and wagon wheels. Bartenders are dressed in Western saloon girl garb and there’s even a gun on the wall they claim belonged to Wyatt Earp after he forgot to come back for it one day. The oldest bar in town, Imperial Billiards and Bar, a.k.a. Imperial Saloon, was also one of the friendliest. The casual, dive bar-like setting is perfect for chilling with some beers and shooting pool while sports fans keep up with the many televised games. Kids are welcome until 8 p.m. 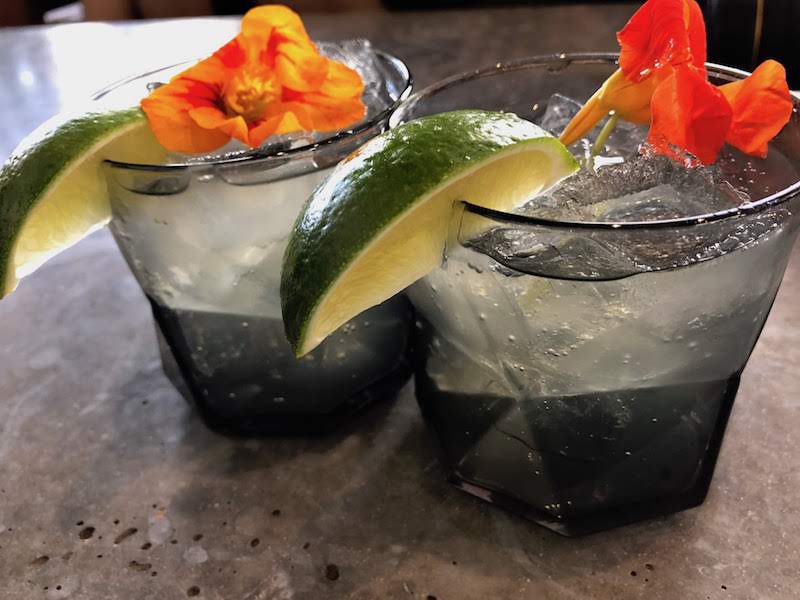